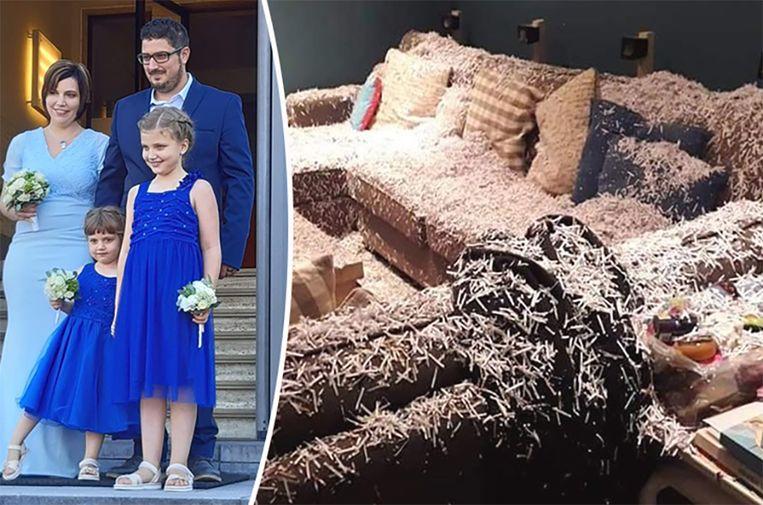 For Kimberly (34) and Jonas De Mits (33) from Waarschoot (Lievegem), the best day of their lives ended in tears. The couple got married on Saturday afternoon, when they came home at night, they discovered real havoc. “Shreds of paper everywhere, from the bread to the wardrobes and shower. Whether it’s a joke from my friends? No, that is not possible,” says Kimberly in tears. “We certainly file a complaint.”

“I no longer feel safe in the house,” says the newlywed Kimberly. She and her husband left on Saturday to return as husband and wife. “We left the house clean, everything locked. And we also made it clear to our friends that nothing should happen to our house. I have given the key to the house to one person, and I trust that one hundred percent.”

The brand new couple arrived home in Renning on Sunday morning around 5.30 a.m. A cloth hung in front of the house, the house filled with shredded paper. “I didn’t realize at; first, I thought I was dreaming,” she says.

“The shreds of paper were everywhere. In the wardrobes, in the shower, up to the bread. Only the children’s rooms and playrooms were spared. I came back sober from the party, my husband… he was sober too.” They cleaned their house for over seven hours. “From 7.30am to 3.30pm we have been busy with twenty people to clean up everything.”

It looks like a joke that is often played out after a marriage: the house of the newlyweds that is ‘decorated’. But that is not the case according to Kimberly and her husband. “My friends cannot have planned this. When I confronted them with the house, they immediately denied. They were in shock, but I didn’t believe them.”

During the day, more came to light, so Kimberly learned that her friends had not done it. “My neighbor was able to take pictures of a suspicious man who was working in our house around 7.30 p.m. He brought full garbage bags and drove around with a Dodge Ram. I have shown his photo to everyone, but nobody knows him. Even if he was hired, he could not enter. All locks have only been replaced since February. And you can’t copy the key, and you need a code for it. What have we done wrong,” she says in tears.

“We are in any case submitting a complaint.” The police, therefore, informed on Sunday morning. “Our teams have prepared an intervention sheet,” the local police in the Deinze-Zulte-Lievegem zone says. “We will contact the couple again later this week to see whether or not to file a complaint.”