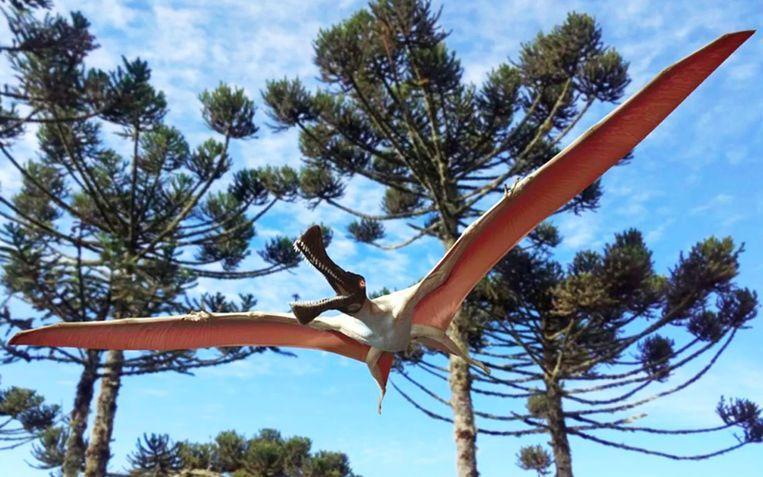 A new species of pterosaurs, a prehistoric flying dinosaur, has been found in the Australian outback. The discovery suggests that the animal survived longer than elsewhere on the continent. He was called “Ferrodraco lentoni,” a reference to “dragon.”

The dino had a wingspan of four meters and possibly lived among the dinosaurs that roamed around 96 million years ago in the Winton area in Queensland, according to a study in the journal Scientific Reports. The winged dinosaur, with spike-shaped teeth, was able to fly long distances. On land, he walked on all four limbs.

Paleontologists discovered the partially petrified skeleton of this new pterosaur species in ironstone in 2017. It was found outside the small town of Winton, known for prehistoric fossils.

The copy was named ‘Ferrodraco lentoni’ – after the Latin words ‘Ferrum’ for iron, ‘Draco’ because it looks a bit like a dragon and the name of Winton’s former mayor Graham Lenton, who died in 2017.

The discovery is the first of its kind in Australia, said lead author Adele Pentland of Swinburne University. Australia does not have many fossils of pterosaurs, with fewer than 20 known fragmentary specimens. The relics of the species are rare all over the world because their bones were thin and hollow.

Researchers said they knew that it was a previously unknown species of pterosaurs because of the unique tooth characteristics, including small front teeth.

The findings suggest that it is a previously unknown member of the Anhanguera genus of pterodactyls, believed to have died out about 100 to 94 million years ago, the study said.