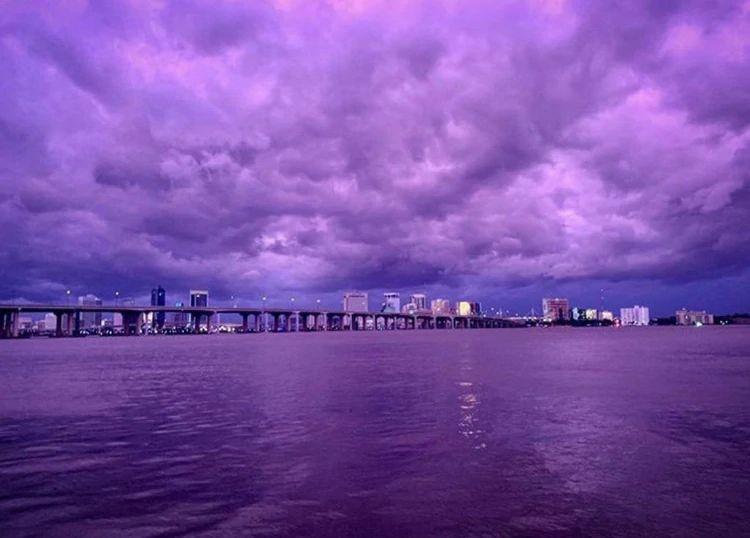 Residents from different parts of Florida posted various snapshots on their social networks to document the beautiful color the Sky took after the storm.

Heavy rains, tides, unstoppable winds, and even tornadoes are some of the weather events that Hurricane Dorian had caused since its inception a few days ago, but the people of Florida, in the United States, witnessed a surprising phenomenon when the sky dyed purple.

Residents from several parts of Florida posted various snapshots on their social networks to document the beautiful color the Sky took after the storm and to thank or express their relief because the meteor of great force did not devastate their homes, despite the bleak forecast for their shores.

Scientists explained to CNN that this phenomenon occurs by the scattering of light through small particles. Typically sunlight moves through the air molecules, which causes the sky to be blue, but this time the path of Hurricane Dorian made it take a very unusual color.

“Dorian’s low-level clouds scattered the light over such a long wavelength that the cameras caught the violet color,” the media said on its website. Jayme King, Fox 35 meteorologist, gave more details of the formation of this phenomenon that amazed Floridians after Hurricane Dorian caused no damage to its territory.

“Therefore, the purple-looking sky is due to ‘refraction’ or the rays of sunlight bouncing off the clouds in the image. Depending on how the light is refracted and the position of the sun will determine the part of the represented color spectrum,” he explained.

“Our little piece of Florida survived Hurricane Dorian, and we were rewarded with this GREAT purple sky tonight!” Wrote a Twitter user. Berivan Keskin, another witness, told CNN that he was in the kitchen when he noticed that the sky changed its hue, a phenomenon lad had never witnessed in the two years he has lived in Jacksonville.

Amy Pope-Latham also told the website that she witnessed the curious phenomenon. It all started when he saw the gray clouds transform into burnt orange color and then “a beautiful violet that continued to become even more vibrant as the minutes passed.”

Hurricane Dorian, now Category 1 and with winds of 90 miles per hour (150km/h), which make it still dangerous, is very close to Cape Hatteras, in North Carolina, whose coasts will hit on its way to the northwest.

The U.S. National Hurricane Center reported that “the life-threatening storm and hazardous winds are expected to continue over part of the coast of North Carolina, part of southeastern Virginia and the southern Chesapeake Bay.” It also warns of possible floods in water levels before the arrival of strong winds. He also points out that there are tidal waves that will continue along eastern Carolinas and southeastern Virginia. He insists that this phenomenon is “life-threatening.”

In its passage through the Bahamas, Hurricane Dorian caused at least 30 deaths, authorities said Thursday.

Bahamas Health Minister Duane Sands told The Associated Press in a telephone interview that the figure is expected to be “significantly higher” in the coming days, while crews continue with search and rescue missions. Sands said the victims are from the islands of Grand Bahama and Abacus and includes injured people who were transported by air to the island of New Providence.