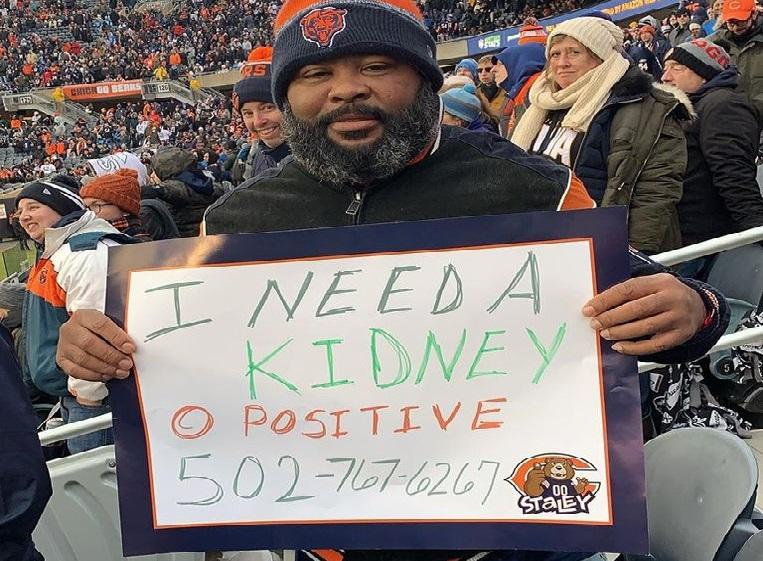 While other fans wrote a funny message hoping to get into the picture briefly during a football match, Marcus Edwards, father of four, was more serious to call: he begged for a new kidney. He was unable to get on television, but thanks to a photo of another fan, he is now going viral. The message has been shared more than 100,000 times on Twitter and several people have registered as donors.

The past year was very difficult for Edward Marcus and his family: he lost his father and stepfather, and on 1 June he heard the bad news that his kidneys would fail. To forget all the misery, Marcus’ wife, therefore, surprised him with tickets for a football match of his favorite football team.

In the stadium, like many fans, Marcus got a sign in his hands to write a nice slogan during the match. While others wrote funny jokes or encouragements for the team, Marcus didn’t hesitate for a second. He took his marker in his hand and wrote what was most important to him: his telephone number, blood type and a call for a new kidney.

When it turned out that he had not come on television with his call, the disappointment was great. Until the next day, to his great surprise, he received hundreds of messages and phone calls. It also rained on Twitter and Facebook statements of support and messages from people who had applied as donors.

Marcus owed all that to an unknown fan, Jessica Jenkins. She and her family were rescued from a major house fire in 2018 when an unknown passer-by sounded the alarm. She, therefore, wanted to give something back and shared the photo. It went viral within time. The mail has been shared more than 100,000 times on Twitter and the photo is also massively liked on Facebook.

According to Jessica’s report, Marcus has to undergo kidney dialysis five times a week and has a very difficult time. “His wife and children are the catalysts that keep him working. They do what they can to regain everyday life and habits while taking on the challenges together,” she added. Yesterday she posted with satisfaction that Marcus and his family are overjoyed with all the messages.

“Your answers are fantastic! I told you we could do this! THANKS! Marcus has responded to more than 1,000 text messages and has hundreds of missed calls that he is trying to answer!”

Edward Marcus is now looking at which donors are suitable but calls on people to keep registering. Every donation can save a life. He has also started a collection campaign to pay for the transplant.