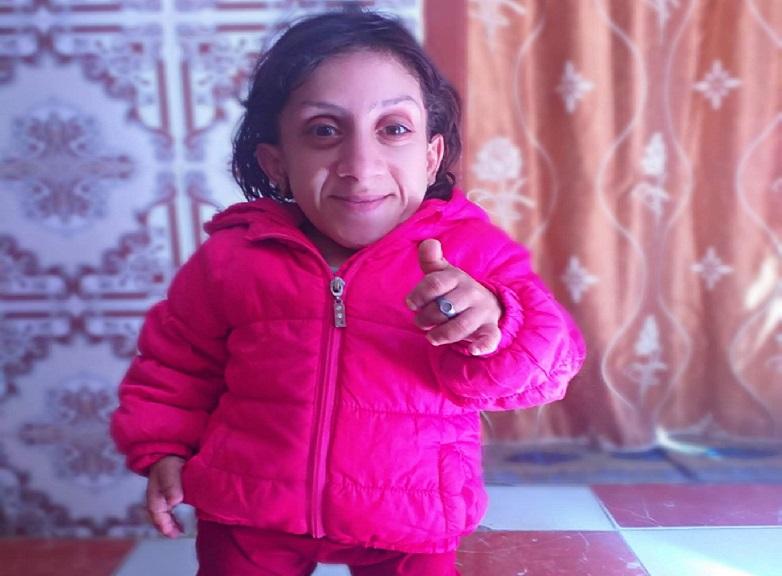 Fadwa Ghnim, 27, has a big dream: to enter the Guinness Book of Records. Measuring 60 cm, this young Moroccan woman from the small town of Fkih ben Salah (center of the kingdom) hopes to be recognized as the smallest woman in the world in place of the Indian Jyote Amge (62.8 cm).

“Life is a hard test when you measure my height, and you can’t find your place in a world built for people of standard size… But you have to fight to exist,” Fadwa Ghnim told Sputnik with a beaming smile of hope and determination.

Under the admiring gaze of her little brother, the young woman says that by applying for Guinness, she aims to turn her dwarfism into strength. Now her greatest wish is to be officially recognized on the pages of the famous record book as the world’s smallest woman.

Fadwa, 27, is two feet tall, the size of a three-month-old baby. It is also – and this is the most important for her – 2.8 cm less than Jyoti Amge. This 26-year-old Indian is the current world record holder for the short stature with 62.8 cm.

A child in Morocco

She made forget the Dutch Pauline Musters (1876-1895), whose history retains the name as having been, during her lifetime, the smallest of all women with 61 cm. A title that Fadwa Ghnim now claims with enthusiasm.

In the “man” category, the current titleholder is the Colombian Edward Nino Hernandez (34), who measures 70.21 centimeters.

“I am proud to be so small, I thank God for making me this way. I am healthy and happy the way I am. If tomorrow I were offered to grow tall, I would say no,” she proudly says.

To see her big dream come true, the young Moroccan filed her request online with Guinness World Records on Wednesday, 12th August. For her, her consecration will be more than a symbol.

“I want to help give visibility to all the people who, like me, suffer from the cruel gaze of people for their difference. I want people to stop treating us like beasts. My goal is also to raise awareness of my illness in order to play down, if only a little, this handicap, ”she claims.
The handicap of which is achondroplasia. A genetic bone disease diagnosed in Fadwa at birth in 1993. Her younger brother, Mohamed, has the same anomaly, as well as a cousin of the family.

As a child, she was unable to continue her education. Adult, she could not land the slightest post. The young woman still lives with her parents and her three siblings in Fkih ben Salah, a small town in central Morocco, located nearly 180 kilometers from Rabat. “I can’t go anywhere on my own… Every time I apply for a job, I get turned down. I would have liked so much to help my parents,” she confides. But these seemingly insurmountable obstacles do not prevent her from thinking big. Today, she dreams of a career in cinema.

“There are very few people with dwarfism who are lucky enough to appear on the big screen in our country. And even those who manage to make it into it are totally dehumanized. It’s sad! If I want to become an actress, it is above all to better represent people like me and allow them to have someone with whom they can identify,” explains Fadwa confidently. Alongside her little brother, she has already performed in a play.

With a mason father and a stay-at-home mother, themselves first cousins, Mohamed and Fadwa, have always loved cinema, despite their lack of means. “Since we were little, we’ve loved watching films, memorizing texts, and imitating actors. It was our way of escaping,” Mohamed recalls in response to Sputnik’s questions.

The 19-year-old is a member of an amateur theatre group. He encounters the same difficulties as his sister and regrets the lack of support from the authorities for Moroccan artists with special needs.

“Fadwa and I have made several requests to the relevant services for help without ever receiving an answer,” Mohamed said.

Through their dream of the big screen and the Book of Records, the brother and sister say, with one voice, that they want to draw the attention of their fellow citizens and the authorities to the situation and disability of people of small stature. This is quite a great mission that the Ghnim impose on themselves and say they are determined to accomplish.

Meet Rumeysa Gelgi, the tallest woman in the world