Norwegian fishermen have made a very special find on the border with Russia. They came across a white dolphin that was wearing some sort of armor. The animal approached the fishing boat without hesitation and started pulling on ropes and cables.

Researchers and marine biologists were eventually able to remove the armor from the animal, and to their surprise read the inscription “Property of St Petersburg.” The animal may have escaped from the Russian military base of Murmansk.

The Norwegian fishermen first noticed the white dolphin or beluga near the village of Inga in the far north of Norway, not far from the Russian border. “We wanted to throw out our nets when we saw the dolphin swim among our boats,” says fisherman Joar Hesten on the Norwegian channel NRK. “He approached us, and it was only then that we saw that he was wearing some sort of armor.”

The animal kept following the boat all the time and clearly showed little fear of the marine biologists who came to the site to take a closer look. The white dolphin kept approaching the boats and grabbed ropes and cables to pull on.

The Norwegian fishermen experts now think that the armor was meant to attach a camera or possibly even weapons to it and suspect that the animal was trained militarily. The Russian naval base of Murmansk is not far from the other side of the border. The inscription ‘Property of St Petersburg’ seems to confirm only Norwegian theory. “If the White dolphin comes from Russia – and we have every reason to believe it – he may not have been trained for scientific research, but for the army,” said Martin Biuw of the Norwegian Institute for Marine Research at NRK.

Dolphins and seals have been deployed militarily for some time, research into them started during the Cold War. For example, the United States uses dolphins when searching at sea or when locating underwater mines. The animals have a particularly good view, are fast and maneuverable and have a good memory. Russia is said to have stopped its research program in the 90s but has re-invested in it in recent years.

In a report from 2017, the Russian Ministry of Defense itself explained that re-testing was being done with beluga, dolphins, and seals. At the same time, President Putin reopened three old Soviet bases on the Arctic coast. According to the documentary, the animals were trained to guard the entrances to the naval bases, but they could also search for mines, lift objects from the seabed and transport objects.

The tests showed that the white dolphins were not particularly suitable for all training assignments. “Many of them fell ill after the long missions in the cold polar waters,” said the Russian documentary. Seals were ultimately found to be more effective, and the animals were also better at performing oral commands. “Seals can actively cooperate with divers: they can indicate or bring objects and they recognize ‘their’ diver in a group of others. With a special command, they can block access for other divers and even try to kill them.” 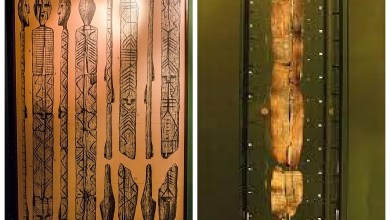 The mystery behind the oldest wooden sculpture: Shigir Idol