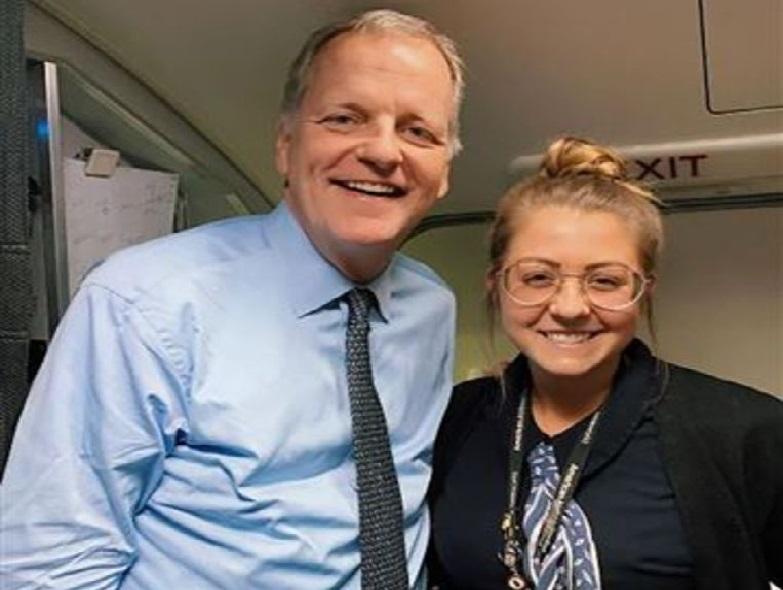 Stewardess Maddie Peters got pretty stuffy when she threw a tray of drinks over an airplane passenger. Normally something to get nightmares from, but certainly if the soaked air traveler is none other than your top boss.

“I had our CEO on board,” writes Stewardess Maddie on Instagram. “While boarding, I served drinks for the guests in first class. I was filled with a tray when one of the passengers stopped in front of me in the aisle and stepped back. He bumped into the tray and all the drinks flew around.”

“Guess who she got over him,” continues Maddie Peters the American Airlines flight attendant. “Half went over me, the other half ended up in Doug’s lap!” Maddie was nailed to the ground. “I would have preferred to have died on the spot,” she still writes with a bit of shock.

“Do I get fired now?” The young Stewardess wondered. Her boss, Doug Parker, fortunately, did not make a fuss about the accident. “No, of course not,” the airline boss replied. Maddie, who had already visited 32 countries in her four years as a flight attendant, was relieved. “He came to me later and we talked for a while.” The air was clear because the two of them could laugh about it for the rest of the flight. Maddie: “Mr. Parker took it very sporty. When we got out, he told me he would never forget me.”