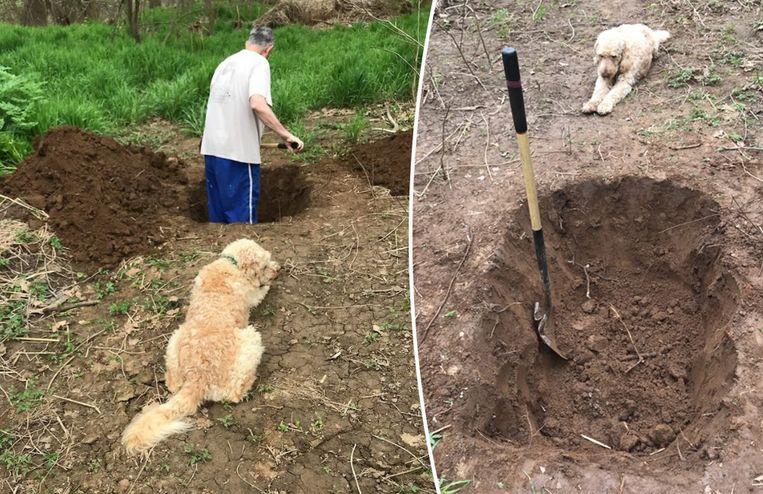 An American writer has shared heartbreaking photos on Twitter. On it, his father can be seen as he digs a grave for his dog while the animal watches. The man from Virginia had been told by the vet that the dog should get a syringe.

According to Franklin Hardy from Los Angeles, the vet had called his father to say that the dog should be released from his suffering and that he would come by for that. “My dad dug the dog’s grave AND LET THE DOG WATCH,” says the man bewildered. When the vet finally arrived and examined the dog, it turned out to be a false alarm. He was healthy.

“The vet told my dad on the phone (??) that his dog had to be put down and he’d come to his house and do it. My dad dug the dog’s grave AND LET THE DOG WATCH. Then the vet came and checked the dog and said it was a false alarm. Oops! Dog’s fine! Everything about this is insane,” he writes on Twitter.

According to Hardy, everything about the story is “crazy”. “Why did the vet tell the bad news over the phone?” He wonders. No idea but when I suggested to my father that the man might not be such a good vet, he replied that he was. And when I asked him why he had the animal watched as he dug his grave, he said it didn’t seem to bother the dog. “It was actually more difficult for me,” it sounded.

The tweet spread quickly over the internet. “I am devastated by it,” it commented, among other things, in the comments. “Look at the expression on the dog’s face.”

Others share similar stories about fathers who bury pets. “My father was once convinced that our old cat was dying and put her in a box before we left for school. But an hour after we got home, she just walked up to us again and meowed as if nothing had happened. The cat then lived for another three years.”

Some see the – black – humor of it again. “Man, this reboot from Pet Sematary is very different from the original from the 80s,” it sounds, among other things, with a reference to the well-known horror film that is currently being shown in a new version in the cinema. And: “Now father can watch while the dog digs his grave. That is no more than fair.”

In the meantime, Hardy also shared a new photo of the dog to show that things are going well after some Twitterers said they were concerned about his well-being.