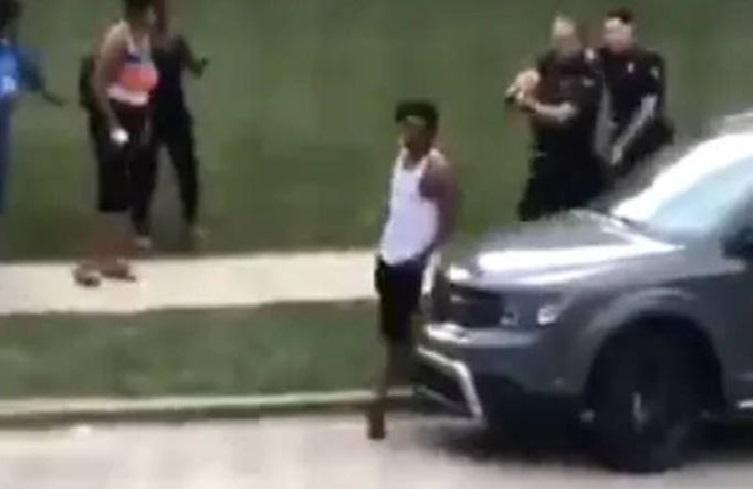 Riot has broken out again in the US after a police crackdown on a black man. Jacob Blake (29) was hit by police bullets several times last night in Wisconsin. That happened ‘in front of his three sons,’ says a civil rights lawyer. Blake was taken to a hospital with serious injuries. Shocking images of the shooting circulating on the internet.

According to local media, police were summoned last night for a “domestic incident” in Kenosha, a city of over 100,000 residents along Lake Michigan in the northern United States.

The video shows how a black man steps towards a black SUV with two white police officers in his wake. According to bystanders, it had previously sought to appease victims of an argument between two women. A police officer points his gun at the man’s back. When he wants to get into the car, gunshots can be heard. Seven in total, according to local media. Next to the vehicle, a woman is screaming hysterically.

The man shot down is called Jacob Blake, the Wisconsin governor later announced on Twitter. He would have been unarmed. According to Kenosha News, Blake was injured in front of his children. His three sons were in the black SUV, civil rights lawyer Ben Crump confirms on Twitter.

Police did not release details of the cause of the shooting. She only confirms that the victim was seriously injured and was immediately taken to hospital. It is not clear how Blake is doing now. The Wisconsin Department of Justice will investigate the circumstances of the shooting. The agents involved have been temporarily suspended.

Governor Tony Evers commented on the facts on Twitter. ‘We are against excessive violence and immediate escalation against Black Wisconsinites,’ said the Democratic politician. Evers pointed out that the events took place in broad daylight and that Blake is “not the first black man or person to be shot by the police in our state or in our country.”

At the same time, he stressed that the exact circumstances of the incident are not yet known.

Enraged residents moved to the scene of the shooting after the facts. They threw stones and Molotov cocktails at the police, according to images on Twitter. An officer would have been injured. The demonstrators also gathered elsewhere in the city later in the evening. They started fires and looted shops.

The authorities in Kenosha have issued a nightly curfew. That will run until at least 7 a.m. Monday morning (local time).

The incident comes after months of fierce protests and tension over the death of black man George Floyd, 46, at the hands of a white cop in Minneapolis. His death sparked a wave of mass protests against police violence, violent riots, and looting. The US police have come under severe pressure from all the criticism and protests. In many cities, gun violence has increased dramatically since May.

Last Friday, police in Lafayette (in the US state of Louisiana) shot another black suspect with a knife who died of his injuries shortly afterward.

Police violence in South Africa: investigation into 20 deaths during the unrest in July

Convicted of murder, released because “no longer dangerous”. He struck again