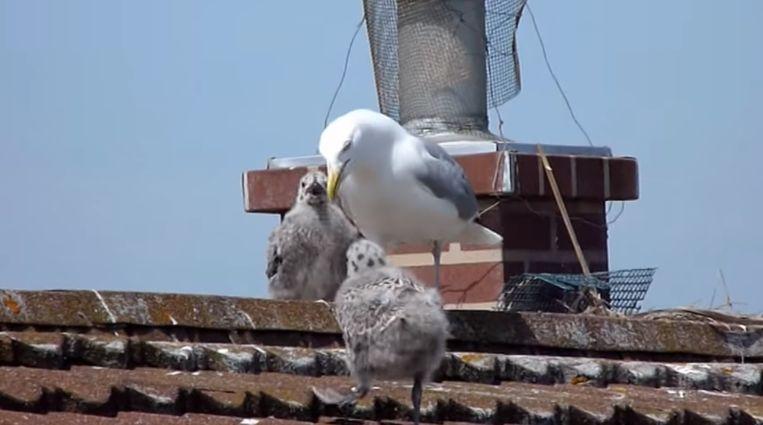 An elderly couple was unable to leave their own home in the English coastal town of Knott End-on-Sea for six days because of a few aggressive seagulls. The birds protected their nest with all their might and attacked the seventies whenever they tried to leave the house. It was like a scene from ‘The Birds’, the horror classic by Alfred Hitchcock from 1963, British media write.

The Herring Gulls, a protected bird species, built their nest on the roof of Roy (77) and Brenda (71) Pickard’s dwelling. No problem, until after a few weeks the two chicks moved out and ended up on the shed at the front door of the building.

For Roy and Brenda, the start of all this misery. Every time the Seventies wanted to leave their homes through the front door, they had to deal with the two adult seagulls who saw in the residents an acute threat. Roy even sustained a serious head injury. One of the birds picked up on the back of his skull. “My wife is difficult to mobile, so I had to drive myself to the hospital in a wounded condition. It’s really scary,“ he said to The Mirror.

The garage is part of the house so the injured man did not have to go outside to leave in his car. The garage door remained open. Fearing a new attack, Roy failed to close it. And that remains the case for the time being, which makes the situation very difficult. The seventies themselves contacted the BBC Radio off the northwestern county of Lancashire to raise the issues. A journalist brought a garden tent that was placed as an emergency solution for the garage.

Roy is not satisfied with the attitude of bird protection RSPB (Royal Society for the Protection of Birds). The herring gull is protected in the nesting phase, at which time it would be illegal to remove the nest. “The birds are more important than the people, that’s how they really see it. That’s ridiculous.”

A spokesman for the Wyre district, to which Knott End-on-Sea belongs, told The Mirror that the municipal services are in contact with the couple. “We understand the situation and we recognize that the herring gulls can be very difficult in the breeding season. We have given them some tips on how to best deal with the birds.” So Roy and Brenda will have to be patient for a while.