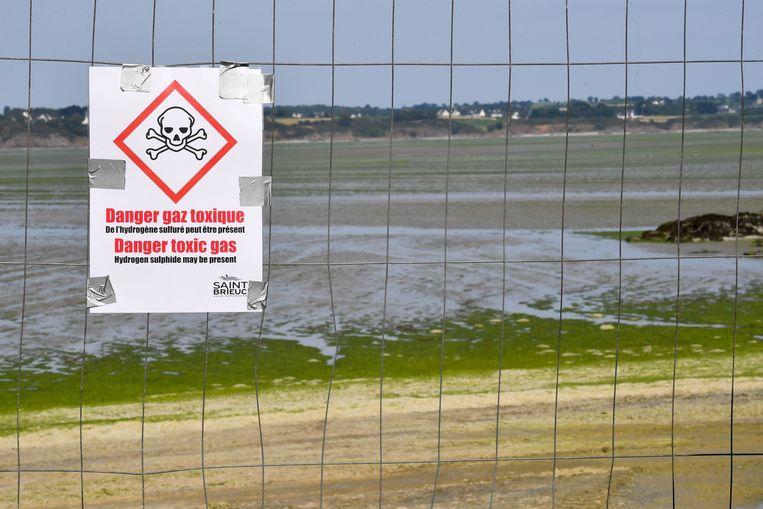 Not only do they stink enormously, but the green sea algae on the French coast in Brittany can also be deadly. Two men died at the beginning of July, possibly because they had come into contact with the poisonous fumes of the rotting algae. Six Breton beaches were closed this summer as a precautionary measure.

“They can kill you in a matter of seconds,” says André Ollivro, putting on his gas mask not far from his bungalow with sea view in the bay of Sa int-Brieuc. “You can’t be careful enough,” said the 74-year-old gas engineer. He has been fighting for weeks against the “killer sludge” of the French coast, as The Guardian calls it. He measures the gas values with his device.

Toxic green algae have been found in Brittany since the early 1970s. “We have been promised beautiful things, but the problem is still there,” says Ollivro. “It’s a pity that this place is now associated with death.” Ollivro remembers that as a 16-year-old he could sail with his uncle through the beautiful nature of the bay. “You didn’t see an accumulation of seaweed at the time.”

So today it is, with potentially dangerous consequences. When the sea algae rot, hydrogen sulfide is released, a toxic gas that in high doses can be lethal and emits a stench of rotten eggs. Victims can lose consciousness and suffer cardiac arrest.

According to environmentalists, the stinking sludge is due to nitrates in fertilizers and waste from the intensive agricultural industry in the region, which has more pigs than people. One in three Bretons works in agricultural and food production. In addition to pigs, cattle and chickens are mainly bred. The farmers think that they are wrongly regarded as the only black sheep. They point the finger at the coastal residents who discharge their wastewater into the sea.

France 24 reported that the city of Saint-Brieuc has cited the “exceptional” as the culprit this year. “The supply of green algae started very early”, it said. “There were few storms and June was a relatively wet month, which led to more water flowing from agricultural areas and thus more green algae.” Bulldozers collected so many algae from the bay of Saint-Brieuc that a processing company had to close down temporarily because the stench was no longer tolerable. Residents could not sleep because of the terrible smell.

In July the smearing around the algae flared up again in France after Jean-René Auffray’s family filed a complaint against the state because it did not take enough measures to prevent the algae from spreading. 50-year-old Auffray went jogging on Hillion’s beach in 2016, but his dog returned on his own. The fit Auffray was found dead in the mud between the rotting seaweed at the mouth of the Gouessant. Five years earlier, more than 30 wild boar had died there. The Auffray family does not want anyone else ever to experience this again.