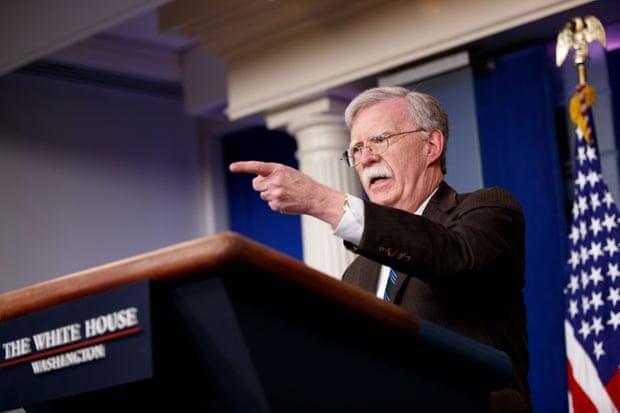 The United States says its new strategy for Africa will now be to focus on controlling the growing influence of China and Russia.

The new American policy for Africa is focused on the struggle for world domination.

The United States asserts that its investments, military operations and national security are threatened by the growing influence of China and Russia on the continent.

“China uses bribes, opaque agreements, and the strategic use of debt to hold states in Africa captive to Beijing’s wishes and demands. Its investment ventures are riddled with corruption, and do not meet the same environmental or ethical standards as US development projects,” Bolton said.

As an example of Chinese leverage, he said Zambia was in debt for up to $10bn to China, which was poised to take over Zambia’s national power company to recoup the debt. Bolton said Djibouti had also fallen into overwhelming debt to China, which had established a military base, close to the US base Camp Lemonnier, and recalled an incident in which laser beams coming from the Chinese base had targeted US pilots, inflicting eye injuries on two of them.

He added that Djibouti may soon also hand over the Doraleh container port on the Red Sea to Beijing, which would tilt the balance of power on the Horn of Africa in China’s favour.

Meanwhile, Bolton accused Russia of selling arms and energy in exchange for votes at the UN. Those votes he added, helped keep “strongmen in power, undermine peace and security, and run counter to the best interests of the African people”.

“The predatory practices pursued by China and Russia stunt economic growth in Africa; threaten the financial independence of African nations; inhibit opportunities for US investment; interfere with US military operations; and pose a significant threat to US national security interests,” he said.

He pointed to past US generosity as a donor, saying that between 1995 and 2006, the US gave as much to the continent in aid as all other donors combined.

“Unfortunately, billions upon billions of US taxpayer dollars have not achieved the desired effects,” Bolton said, and made clear the Trump administration would take a far more sceptical view of UN peacekeeping operations.

“We will only back effective and efficient operations, and we will seek to streamline, reconfigure, or terminate missions that are unable to meet their own mandate or facilitate lasting peace. Our objective is to resolve conflicts, not freeze them in perpetuity,” Bolton said.

“And, we will not provide legitimacy to missions that give large payouts to countries sending poorly equipped soldiers who provide insufficient protection to vulnerable populations on the ground.”

Bolton added: “Establishing peacekeeping missions is often the end of creative thinking … There needs to be a lot more focus on resolving the underlying conflict.”