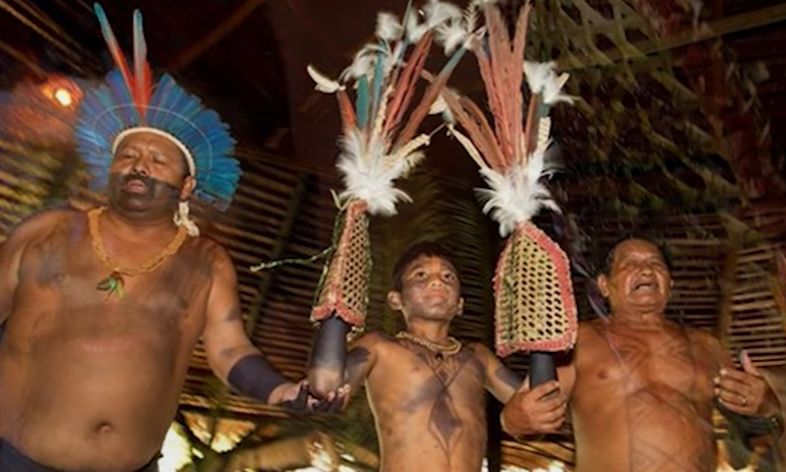 To become a man and warrior in the Sateré-Mawé tribe of Amazon rain forest, Brazil, you must undergo the tribal ritual of Bullet Ant Gloves. The ant venom is painful, and it can cause muscle paralysis, disorientation, and hallucinations for hours.

Although one of Brazil’s twenty-six states and home to several major cities, Amazonas remains mainly covered by South America’s lush rainforest’s dense foliage. In the depths of the jungle, many indigenous tribes still follow their traditional way of life.

Undisturbed by outsiders for many years, these independent natives perpetuate ancient practices and rituals that have contributed to their survival amidst the perils surrounding them.

One of the largest of these groups is the Sateré-Mawé, a tribe of about ten thousand members who inhabit the northern Amazonas region. Although the tribe lives in relative isolation and has little contact with outsiders, the Mawé have allowed the rare visitor to document their unique way of life and traditions.

Bullet Ant Gloves is one of the tribal rituals in the Amazon jungle in Brazil and an unbelievable initiation ceremony for those men wanting to become warriors. In the rainforest lives a species of ant known as the bullet ant. Those who have been stung by these ants described the pain as the equivalent of being shot; hence their name keeps that in mind.

During the initiation ceremony preparation, the ants are put to sleep and collected in the jungle. Hundreds of ants are gathered and sedated with a natural sedative. While unconscious, the ants are woven into a pair of gloves made from leaves, with their stingers facing inwards.

To be considered a man of the tribe, boys as young as twelve will thrust their hands into the gloves for a full five minutes (or longer), being stung the entire time. The tribe leads the initiates in song and dance during the ordeal, but this distraction is their only relief.

One would wonder the kind of distraction that will make the boys forget the pains. Not when ants begin to sting over and over again, tied in place, and the boy has to wear the gloves for 10 minutes of sheer agony.

The effects of venoms

Once the gloves are removed, the ants’ venom will continue to work for hours. In addition to the pain, it can lead to muscle paralysis, disorientation, and hallucinations for hours. Most times, arms are entirely paralyzed in unimaginable pain and usually shake for days.

Afterward, the willpower to get through this initiation must be so intense but at least once the pain and paralysis have subsided, he’s a warrior, and he can forget all about it, right? Nope! The boy must do this 20 times to complete initiation, which can last for years before he is considered fully initiated as tribal warriors.