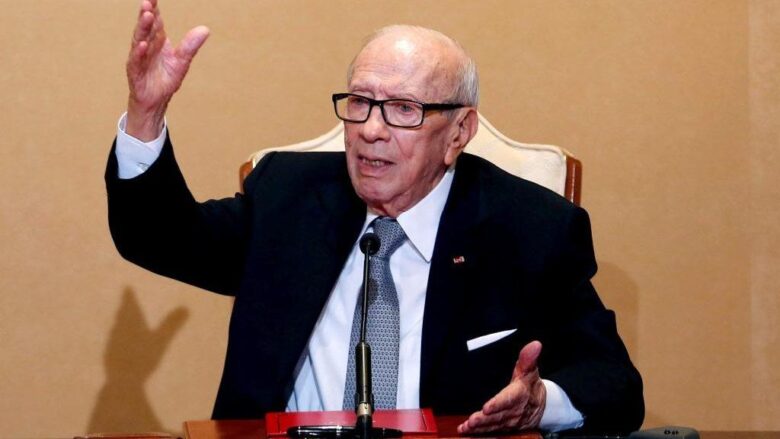 Tunisian President Beji Caid Essebsi died at the age of 92, a few hours after being hospitalized in intensive care, according to the presidency.

Tunisian President Beji Caid Essebsi died at the age of 92, a few hours after being hospitalized in intensive care, according to the presidency. The Tunisian president had already been transferred to the “Military Hospital of Tunis” on 27 June, when two suicide attacks hit the Tunisian capital, killing a police officer and injuring at least eight others.

In December 2014, Beji Caid Essebsi was elected President of Tunisia, the first to be freely elected by universal suffrage. He had beaten outgoing candidate Moncef Marzouki with 55.6% of the vote.

In April 2019, the head of state announced that he did not intend to run in the presidential elections of 2019. Mr. Essebsi was interim Prime Minister from February to November 2011 after the dismissal of President Zine El Abidine Ben Ali in January 2011. He left office after the first post-revolutionary elections in Tunisia, which brought the Ennahdha Party to power.

In June 2012, he formed his own secular political party, Nidaa Tounes, which won 85 seats in the October 2014 parliamentary elections, while the Islamist Ennahdha Party won 69 seats.

In October of the same year, the party’s founder, Beji Caid Essebsi, in an interview with the London-based Arab newspaper Al-Hayat, said of Nidaa Tounes, that this “represents all of Tunisia and not just the capital. We are not leftists, right-wingers or centrists, we are only Tunisians who have no ambition to be able (…)”.

The appointment of his son, Hafedh Caid Essebsi, as the party’s executive director in January 2016 has created a stir within the political party. Since then, Nidaa Tounès has not been spared by divisions: the birth in January 2019 of a dissenting party linked to Prime Minister Youssef Chaheden is the consequence.

His presidency was marked by security challenges, including high-profile attacks on foreign tourists in the capital Tunis and the seaside resort of Sousse in 2015, as well as those against the security forces by Islamist militants near the borders with Algeria and Libya.

Essebsi had a long political career under the old regimes, including as Minister of Foreign Affairs (1981-1986) and Ambassador to France (1970-1971) and West Germany (1986-1987). He also wrote “Le Bon grain et l’ourraie [e.d The Good and the Dirty]” in 2009, a book recounting his experiences with former President Habib Bourguiba and was decorated on November 23, 2011, for his role in managing the country’s affairs following the Jasmine Revolution in January 2011.