Is another step closer to a sequel to the ‘Bite Fight’? After Mike Tyson (53) and Evander Holyfield (57) started training intensively and alluding to a rematch, a poster of the camp is now circulating on social media. The date? July 11. The location? Saudi Arabia.

Tyson was the first to spark speculation. He has been busy for several weeks – “I’ll be back”, it sounded recently. “I want to get in shape to fight three to four rounds for different charities. I want to raise money for homeless or drug-addicted idiots – not including myself,” he said at the end of April. His videos on Instagram left little to the imagination.

Holyfield was clearly stimulated because a little later, he also started training again. And of course, there were images and some statements. “My 1st week back in the gym, and I feel great,” it sounds

“. I’m looking forward to stepping up my training sessions and intensity as I prepare for my fight. I told you I had something for you.” And coincidentally or not, he also uttered the words “I’ll be back”.

When asked if he would like to fight Tyson for the third time, Holyfield was clear. “Of course, I want to fight Mike. I am open to it, and I know that I would do well for myself, especially at the age of 57. I can handle it, but Mike must, of course, want it himself.”

Speculation has now reached a new level. After all, a poster of the rematch is circulating on social media. Tyson and Holyfield would face each other on July 11 in Diriyah, Saudi Arabia.

Whether it is a creation of an enthusiastic fan or whether Tyson versus Holyfield part 3 does have a date, will soon become apparent.

Saudi Arabia would not be a surprising place. At the end of last year, Anthony Joshua and Andy Ruiz Jr. working for ‘The Clash on the Dunes’. The Middle Eastern country paid no less than 97 million euros.

“The intention is to bring even more boxing camps to the Middle East. Those countries want to become important in boxing. There is more than Cardiff and New York alone,” it said. A duel between Tyson and Holyfield would fit that picture perfectly.

Holyfield has an old account to settle with Tyson. During their second and final world title fight in June 1997, ‘Iron Mike’ bit out of the ear of ‘The Champ’. Tyson was disqualified and lost his boxing license for a while.

Trump lashes out again: Obama was a very incompetent president 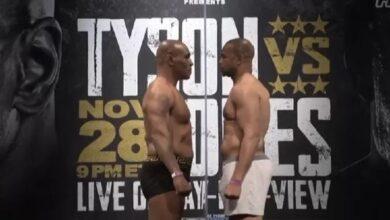 How much can he earn? What to know about Tyson’s return to ring