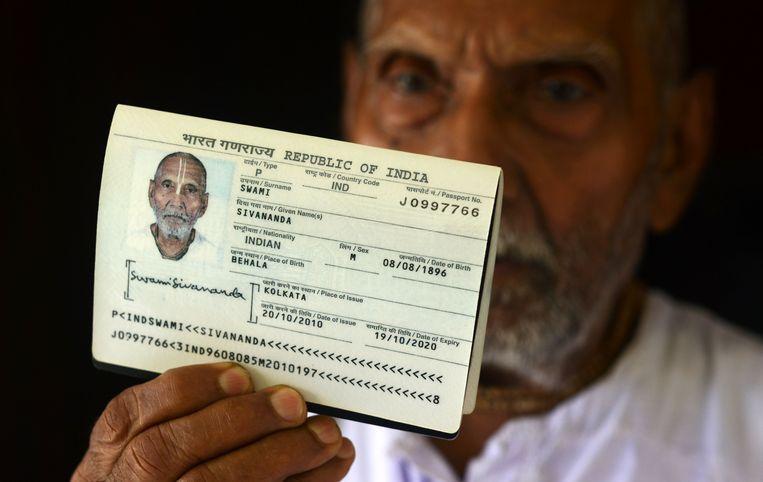 Swami Sivananda, an Indian man who according to his passport was born on August 8, 1896, and should be 123 years old, is in consultation with the Guinness World Records book to be listed there as the oldest person ever. This honorable title is now in the hands of Française Jeanne Calment who died in 1997 when she was 122 years and 164 days old.

Three years ago, Sivananda also tried to make a mention in the record book. Then the makers wanted more certainty about the exact age of the man from Calcutta, the capital of the Indian state of West Bengal. The date of birth of the man is said to have been checked in the records of a temple complex in his hometown. There, as in his identity document, the date 8 August 1896 was mentioned after his name. But it is still unclear whether Swami who applied is the same Swami born in 1896. That with 100 percent certainty and independent guarantee are almost impossible.

Sivananda maintains that he actually saw the light of day in 1896: the year that the very first Olympic Games were held in Athens, the invention of X-rays was announced, the classic cycling Paris-Roubaix was driven for the first time, the German aviation pioneer Otto Lilienthal crashed with his biplane, and the first cinemas for moving images were opened.

If the data is correct, the scratchy Swami Sivananda is the oldest man ever. The Japanese Jiroemon Kimura, who died in 2013 when he was 115 years and 253 days, is still in the Guinness World Records as such. That stays that way until everything about the Indian man is sorted out to the bottom.

What is certain is that the modest-looking Sivananda never really went on sale with his age. He stood out for the first time three years ago when he arrived in London by plane. The customs there saw that the date 8 August 1896 was on his passport and announced the remarkable find to the world because it turned out to be a real identity document. The then 120-year-old man became world-famous in one fell swoop and gave a trembling voice to some international media who wanted to know how he could grow old. The secret of his blessed age? No sex, no fine herbs and extensive yoga practice every day.

“I know that sex exists, but I have never felt the need to experience it,” Swami Sivananda said.

“I actually lead a straightforward and very disciplined life,” said the Hindu monk in an earlier interview with the AFP news agency. “I eat very simply. Only cooked food without oil or spices, with rice and boiled lentils and a number of green peppers.” Milk and fruit are not on the table with the Indian, because he believes that this is ‘trendy food’. He sleeps on a mat on the floor with a wooden plate as a ‘pillow’.

Sivananda grew up in extreme poverty and often went to bed with a hungry stomach. His parents died before he was six when a so-called guru (Indian clergyman) took the boy under his care. In this way, he became a monk himself. He traveled all over India until he was one hundred years old and eventually settled in the city of Varanasi on the banks of the Ganges River. Varanasi is one of the oldest cities in the world and a famous and holy place of pilgrimage.

The Indian, who according to experts and the AFP interviewer looks 50 years younger, is still healthy. He lives alone and subjects himself daily to hours of yoga sessions. “It’s all about staying supple, discipline and above all sexual abstinence,” he still teaches. His motto is to stay further away from modern technology such as computers, televisions and telephones. “I prefer to be alone. Once upon a time, people were happy with little. Today it’s completely different, and it hurts me to see it because people die younger because of it.” The fact that he never had sex is no loss. “I know it exists, but I never felt the need to experience it.”