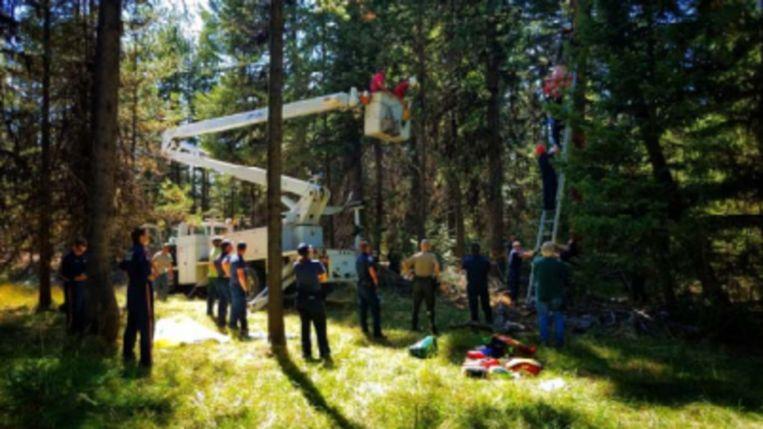 Eddie Voelker, a 70-year-old hunter from Prineville in Oregon, dropped out of a high seat earlier this week and dangled upside down in a tree for two days.

About nine meters above the ground, only hanging from his safety vest, he roared for help. Two hunters who heard his call for help needed one and a half hours before they realized that the roar was coming from the foliage.

At Voelkers’ outburst from the elevated hunting site, the climbing harness he wore turned out to be his salvation. The thing gets tangled up in the branches, eventually hanging upside down in the tree.

When Steven and Joseph Royston heard him call for help from more than a mile away, the unfortunate hunter had been turned upside down for two days.

Still, it took some time before father and son Royston realized that the older man was hanging over them. For more than ninety minutes, they roamed through the forest before they found Voelker and sounded an alarm. With the help of a cherry picker, Voelker was finally released from his plight. During the rescue, his heart even stopped.

The persistent pressure on his head also caused swelling of Voelker’s brain. After being resuscitated, a helicopter flew him in haste to a hospital in Richland, Washington. Doctors have put him there in an artificial coma. Despite an intervention to reduce the pressure on his brain, the man is unable to breathe independently.

Voelker is currently on the ventilator and is in a critical condition. Family members later returned to the scene of the disaster, to pick up his hunting dogs that were still in the hunting camp.