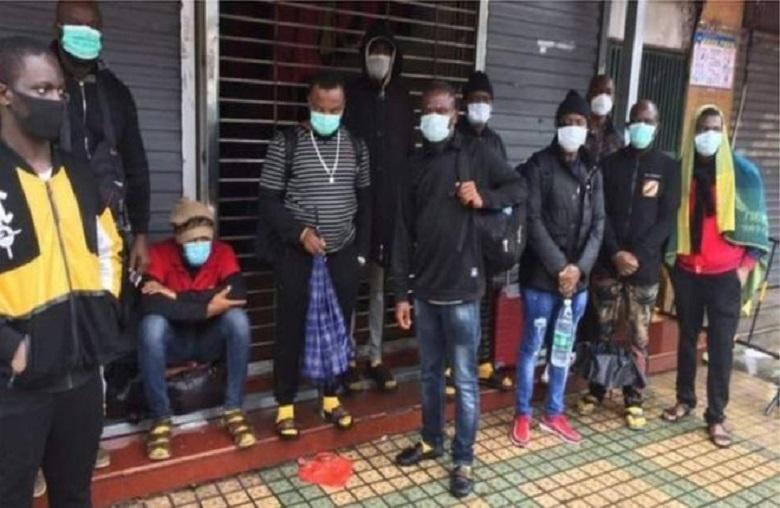 Africans are seething because of Chinese corona racism and two French doctors suggested experimenting anti corona vaccine in Africa. A video of an African woman being discriminated in China has fallen very badly in Africa. Chinese diplomats are working overtime to appease the new riot.

While Chinese diplomats thought they had somewhat tempered the anger in Africa over the alleged discriminatory treatment of Africans in China, anger has re-emerged on African social media. This time it is about a clearly racist video that was posted on Twitter on Friday.

The 38-second video has since gone viral. You can see and hear how two Chinese officials in a shopping center let everyone through, except an African woman. The video initially posted on TikTok was captioned, “this is the treatment that black people are now getting in China; they are not allowed to enter the mall.”

The sentiment on African social media is that the video confirms what many on the continent were already angry about because of the coronavirus; the discrimination against Africans in China would have become painfully clear. Previously, there was considerable outrage at events in the southern Chinese city of Guangzhou, where Africans were allegedly forcibly evicted from their homes and, in some cases, forced into quarantine or compulsorily tested for COVID-19.

China fears a second wave of infections from people returning to China, including many Chinese who were abroad when the crisis erupted, as well as thousands of African students. In addition, Africans are said to have been turned away in Chinese hotels, and their passports confiscated.

South African President Cyril Ramaphosa, who also serves as President of the African Union, also reacted angrily and demanded an investigation. “As Africans, we are shocked at reports of ill-treatment of African citizens living in China. We call on China to treat all Africans with dignity and equality, just like other foreigners in China.”

The Chinese Foreign Ministry said last week that it had heard concerns from African countries and that the authorities would definitely investigate the reported cases in Guangdong Province. Formally, good relations between China and Africa are always decorated in propaganda language, but it is often different on the street.

“China and Africa have always been good friends, good partners, and good brothers,” said government spokesman Zhao Lijian. During the epidemic, China had felt strong support from Africa. The other way around, the Chinese government and the Chinese people are now quickly helping Africa now that the continent itself has increasing corona problems, he emphasized.

“China’s friendly policy towards Africa will never change, our friendship with African countries is close, and we will never discriminate against our African brothers.” He added that of the 3,000 African students in Hubei Province, only one had been infected, but this student was treated quickly and well.

All that has not removed the annoyance in Africa, especially after the last video. African Ambassadors in Beijing – from Ghana and Nigeria, among others – wrote an open letter last week expressing concerns about the ‘stigmatization of African people’.

Steven, a Nigerian living in Guangzhou who does not want to give his last name, says in a conversation with a Hong Kong newspaper: “I only go out at night because if I go in the afternoon, people can see me. As you know, there is that hostility in their eyes.” The neighborhood where he lives is known as ‘Little Africa’, but many Chinese calls the district ‘Chocolate City’ because of the alleged chocolate skin color of many residents.

The issue is important because of China’s primary economic interests in Africa, where vital raw materials are mined. In addition, thousands of Chinese companies and their employees are located in Africa. For that reason, billions of dollars are invested annually to improve relations between China and many African countries. Conversely, China admits many African students as well as African workers and entrepreneurs, especially in Guangzhou.

Zhang Tingzhi, a Beijing-based expert on China-Africa relations, thought it was a storm in a glass of water and thinks prejudice is not uncommon in times of stress and tension. “In China, under all the pressure from the virus control measures, we have seen Chinese people act rude to other Chinese from outside their hometown. People from Wuhan have been harassed elsewhere in the country. That’s between people, and it doesn’t have to be an international issue.”

Recently there was also great anger in Africa about a fragment on French television in which two doctors suggest experimenting with anti-corona vaccines in Africa. This aroused, among other things, the anger of prominent figures from the African football world.

1 thought on “Afrophobia in china, after idea of using Africans to test corona vaccines”