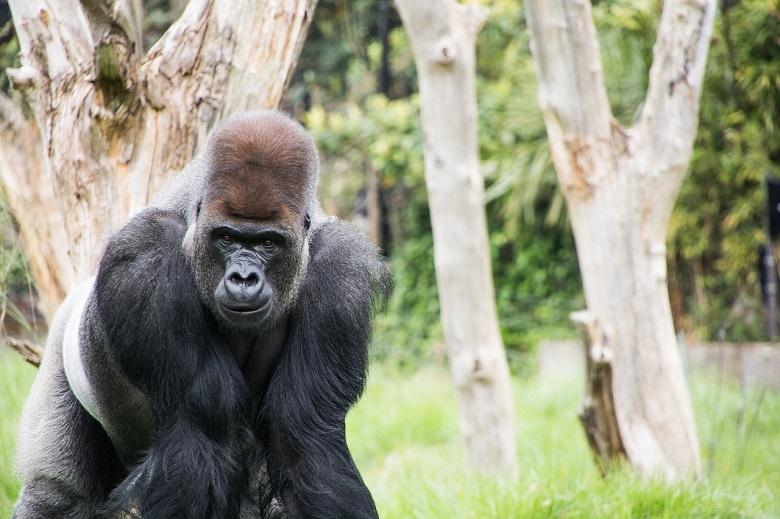 Adult male gorilla from the age of 12 is referred to as a silverback because of its characteristic silvery-gray fur. Here is the overview of silverback gorilla’s weight, strength, fight, size, and behaviors.

While the light coloration is limited to the back in the Eastern Gorillas, it can also extend to the hips and thighs in the Western Gorillas. Other unique features are the long canine teeth, an unusually large throat sac (to amplify the sound when breast drums), and a pronounced crest that the male gorilla develops over time.

The average height of a silverback is 1.7 meters, and it weighs up to 230 kilograms. Life expectancy in the wild is 35 to 40 years, the oldest animal in human care – Ozoum (Ozzie) in the Atlanta Zoo – is 58 years old (as of 2019). The first captive-born gorilla called Colo from the Columbus Zoo in Ohio died in 2017 at the age of 60.

Dominant Silverbacks are leaders of their respective families or group, which can include up to about 30 animals. They are responsible for the cohesion, security, and well-being of their families. They settle internal conflicts and make all the necessary decisions, such as regarding the time and direction of their group’s migration in search of the best feeding places.

They face both the challenge of another silverback gorillas that the group wants to take over and the threat from human poachers. Therefore, they naturally have the full attention of the group, which is usually gathered around the silverback. The physical proximity to him is an indication of the rank of the other members, especially that of the females.

In addition to the leading silverback, there can also be other non-dominant silverbacks in a group. However, they will try to contest his leadership when they see the time. Male gorillas usually leave their family of origin at the age of eleven, but sometimes they remain in the group and take over their father’s family when he is forced to give up the tour due to his age.

When the leader dies – be it due to illness, accident, or a fatal confrontation with poachers – his family usually disintegrates, she and looks for another dominant male who offers her the necessary protection.

In the mountain gorillas of the Virunga volcanoes, a silverback leads his family for an average of 4.7 years before he dies or is disempowered by a rival. This rivalry means that adult male animals often live as loners for a long time before they fight to lead a group or after they have to surrender it.

Silverback lives in polygyny and gathers a harem of as many females as possible. Usually, only the dominant silverback has the right to reproduce, but there are exceptions. Females occasionally mate with lower-ranking males without the knowledge and consent of the leader – possibly a strategy to prevent their children from being killed if one of these males takes over the group.

However, the granting of a “permission” from an (aging) leader has been observed several times: by giving sexual rights to a (younger) rival, he ensures his cooperation in protecting the group and thus prevents the danger of leading the group to hand over to him.

DNA analysis of mountain gorillas showed that the dominant silverback did not produce about 15% of the offspring.

The mating initiative almost always comes from the females, who are only ready to conceive within three days of their monthly cycle. They signal their willingness through approach, posture, and long-term eye contact with the male. In the case of mutual agreement, several pairs are usually made every few hours to ensure conception.

If a group is taken over by a new leader, the latter sometimes kills his predecessor’s babies to successfully mate with the mothers who are now ready to conceive. In addition to the mountain gorillas, where it appears to be relatively common, this behavior has now (2004) also been observed in the eastern lowland gorillas.

In purely male, D. H. Bachelor groups have also occasionally been observed homosexual mating. The “passive” gorillas were always younger than their “active” partners. Research explains these sexual interactions with the unavailability of females combined with the excess sexual energy of the males.

Silverbacks often behave indifferently towards their young, and occasionally they also put them roughly in their place. However, if their mother dies, they allow the half-orphans more closeness and affection than usual, e.g., by sharing their sleep nests with them and ensuring the necessary protection against nighttime coldness through their body heat.

In the event of a threat, they take a stand between the attacker and their family and try to drive them out through a sequence of threatening gestures. These include showing off their physical strength (showing themselves to the side of the potential attacker), bare teeth, staring gaze, screams, and drums on the chest, breaking off and hurling branches, and finally, a – mostly pretended – attack.

In addition, with the help of glands in their armpits, they produce a particularly intense smell, which signals excitement and readiness for aggression. With rival silverback, if this strategy of intimidation fails, real battles sometimes occur, which can also be fatal.