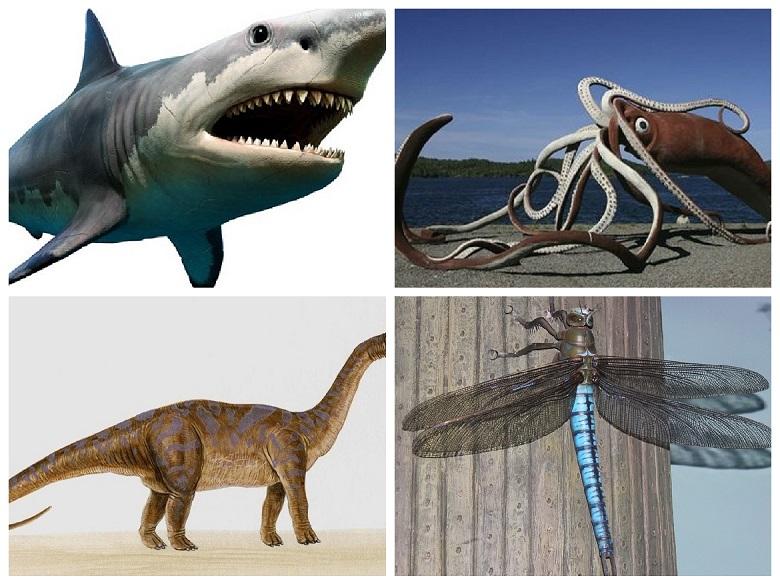 In different historical periods, the climate on our planet was significantly different from the current one. Yet, some animals strive hard to survive, including the gaint ones.

The largest animal in the history of the earth

From time immemorial, the water element was the best suited for the cultivation of giant creatures. Among them were 11-meter nautiloid molluscs from the Silurian times, 13-meter plesiosaurs of various subspecies native to the Triassic, 24-meter ichthyosaurs many other animals.

But relatively recently, in geological terms, at the beginning of the Cenozoic era, mammals, which dominate the planet to this day, began to displace lizards. Whales are superior in size to any pre-existing animals, and the blue whale rightfully belongs to the palm among them.

This giant reaches 30 meters in length and weighs over 180 tons. At a time, this creature inhales more than three cubic meters of air, 8000 litres of its blood pumps a thousand-kilogram heart through vessels reaching 40 centimetres in diameter, and its tongue weighs 4 tons. Moreover, the blue whale goes its gigantic size on the stern of krill and plankton.

In the Oligocene epoch, according to various scientists, the predatory shark Megalodon reigned in the marine environment, which became extinct by the middle of the Pleistocene. This ferocious predator reached 16 meters in length and weighed up to 47 tons, although discussions about its estimated size are open to this day. According to some calculations, it could well be more significant than a whale shark.

Today, it has only been established that the most giant discovered shark teeth reach 18 centimetres in length. Based on this parameter, the estimated dimensions of the creature are calculated according to the characteristics of the great white shark – a possible relative of the megalodon.

This fish is considered the largest carnivorous vertebrate ever to exist. According to computer reconstruction, the force of its bite could reach 11 tons.

An even more impressive Jurassic herbivore, the diplodocus, also lived in North America about 150 million years ago. However, in assessing its size, the opinions of scientists diverge dramatically, even though the skeletons of diplodocus are the most “recognizable” for palaeontologists. Initially, the length of the diplodocus was estimated at 52 meters, which would correspond to more than 100 tons of weight.

But later, it turned out that scientists have seriously “exaggerated” the number of caudal vertebrae of the lizard, and according to the specified data, its length did not exceed 35 meters. But even in the light of discoveries, scientists cannot reach a consensus regarding the animal’s weight – today, it is estimated at between 10 and 80 tons.

The legends of the Kraken are not as unfounded as sceptics would like to think. More than 400 million years ago, the oceans were teeming with giant ammonites, and the gigantic architeuthis squids inhabit the present ocean depths. It is one of the largest invertebrates on earth today. The length of their tentacles exceeds 16 meters, and the mantle can reach three or more meters in length. It is also the most big-eyed creature on the planet: the diameter of its eyes with a 9-centimetre pupil reaches 27 centimetres.

Already in our century, scientists have succeeded in photographing and filming a giant squid in its native habitat. Of the natural enemies of the architeuthis, only the sperm whale is, and he can eat a medium-sized shark itself.

Not only whales are impressive in size, but there are also real giants among the fish too. The whale shark has a record size among the currently existing fish, the average length of which is 14 meters, and, according to unconfirmed reports, some specimens can reach 20 meters in length. The width of the tail of this shark can reach 5 meters, the pectoral fins are 2.5 meters, and the mouth of the “fish” is almost one and a half meters wide.

Despite the frightening generic name, the character of this fish is slow and peaceful. It eats, in contrast to her predatory fellow tribesmen, mainly plankton.

In the Carboniferous period of the geological past, there were predatory insects; due to the increased oxygen content in the atmosphere, they grew to frightening sizes. The wingspan of the giant dragonfly Meganeura could exceed 60 cm, and its larvae, which led a terrestrial lifestyle, were also hunters.

Other rather big insects, dictyoneurA, which is comparable to the size of a pigeon, served as food for them. These insects, in turn, fed on the ovules of ferns and conifers. In collaboration with palaeontologists, contemporary artists have succeeded in reconstructing the appearance of these insects and creating a model that has become an exhibit of the museum.

By the middle of the Cenozoic, the earth was completely mastered by mammals, which were both very tiny creatures and giant herbivorous species. Among the latter, Deinotherium was distinguished by its extraordinary size, which was surpassed in mass only by Indricotherium. Deinotherium could reach a height of 4.5 meters and weigh up to 14 tons.

A significant difference in the appearance of this animal from a mammoth is that its tusks are located on the lower jaw and bent downward. Scientists have not yet been able to establish what and how the animal could use them.

Giant centipedes and dragonflies the size of a helicopter are by no means the invention of science fiction writers and horror film writers. These creatures existed on earth long before the dinosaurs – in the Carboniferous period. Arthropleura, the largest of the terrestrial invertebrates, lived in what is now Europe and North America. Its segmented body reached 2.5 meters in length, and it moved with the help of 30 pairs of limbs.

It is believed that Arthropleura fed on lyre and ferns and could eat up to a ton of greenery per year. An abundance of green plants, an increased oxygen content in the air, a warm climate and the absence of natural enemies allowed the terrestrial invertebrates of the Carboniferous to reach gigantic sizes.

The most giant land creatures lived in North America during the late Jurassic period. So, the body length of nine-meter herbivorous dinosaurs reached 23 meters, and the mass, according to various estimates, could vary from 18 to 32 tons.

And this whole grandiose colossus was controlled by only a 400-gram brain. It is believed that this was enough to stand on its hind legs, reaching for the juicy upper leaves and waving its powerful tail, fighting off predators. The bones of the skull of Apatosaurus were so thin and fragile that scientists could not find them for a long time to reconstruct the skeleton completely.

These giants led a gregarious lifestyle, eating and trampling colossal amounts of green mass in the shortest period. Having destroyed vegetation in one area, they just as quickly migrated to another.

Giant relatives of modern elephants, mammoths, became extinct recently by historical standards – no more than 9,000 years ago. The largest of them, the imperial mammoth, reached 5 meters in height and could weigh up to 12 tons, which is at least twice the size of modern elephants.

It is believed that mammoths were perfectly adapted to life in cold climates, as evidenced by the long thick wool, which reached 90 centimetres in length in some species, and the unique structure of the trunk, which made it possible to find plant food under the snow. 4-meter tusks of mammoths could weigh up to 100 kilograms each.