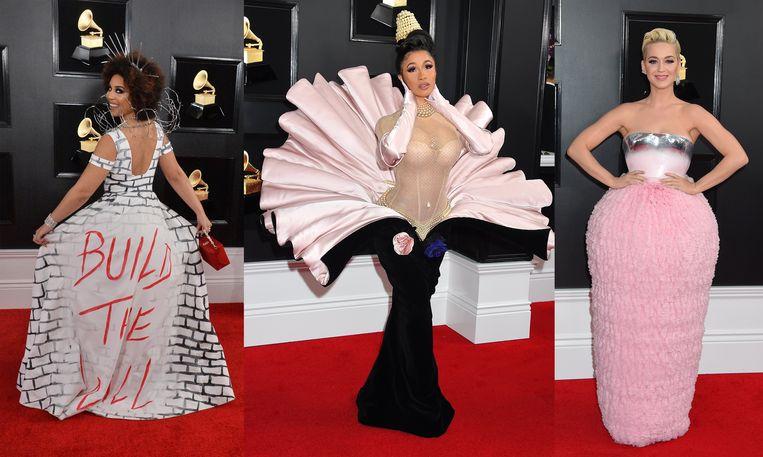 When a red carpet is rolled out somewhere, stars get everything out of the closet to stand out. And that was no different at the Grammy Awards – the most important music prizes. Beautiful and eccentric? Yes. Comfortable? Not really. A commonly used solution: quickly change the outfit for the big event itself.

Sunday evening, the presentation of the Grammy’s took place in the US. And as expected, we were short of eyes to spot all the beautiful outfits. Singer Joy Villa came dressed as the ‘wall of Trump’. Cardi B sought inspiration from the painting “The Birth of Venus” and Katy Perry got the mustard from an – ahum – flamingo (or we suspect it). Very original, but not exactly comfortable. It is therefore no surprise that many stars change clothes after the red carpet.

“Those stars are pulling on their dresses, but they’re going out again just as quickly,” Hollywood reporter Kristien Gijbels says laughing. That quickly raises one specific question: why do stars ever struggle so much in uncomfortable dresses, only for the red carpet? “Usually they have an agreement with a well-known designer. Of course, he wants his design to be seen on the red carpet”, she explains. Some top designers even have a lot of money for that. Depending on how familiar a star is, they pay him or her between 100,000 and 250,000 dollars (about 88,000 to 220,000 euros) to parade with a particular dress over the red carpet. “But at the after party everyone is guaranteed to walk around in a different dress”, says Kristien.

Anyone who thinks that changing outfits quickly happens quickly is wrong. “Actresses, singers and co. do not quickly change clothes on a toilet. Often there are separate rooms or rooms provided. And that is also necessary. After all, everyone has a familiar team of make-up artists. Not only the dress is changed, there is also a lot of time in the make-up. It’s about a real makeover,” says Kristien. “You cannot imagine how much money is spent, just to look good. I am a nobody, but before the presentation of the Golden Globes, for example, I had paid more than 500 euros for an outfit, spray tan, make-up and hairdo. With stars it is about thousands of euros.”

And what happens afterwards with the flamboyant outfits? According to Ariana Weisner, a stylist from Hollywood, most of the items return to the designer. “Very occasionally the star receives the dress as a gift. But in most cases, they are back in the hands of the designer. When it comes to big names like Dior, Louis Vuitton or Chanel, chances are that the dresses will be stored in the archive of the fashion house.”