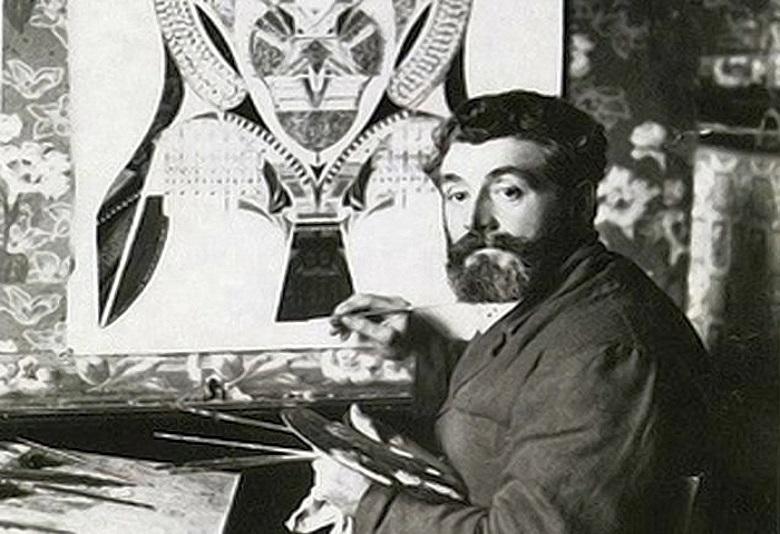 Perfectly symmetrical compositions, rows of ancient Egyptian and Zoroastrian symbols, hypnotizing rhythms – like a mirror broken into many fragments, reflecting the reality of another world. A professional artist did not create huge canvases filled with minor details. All this is the creation of one French miner and probably several dozen of ghosts.

Augustin Lesage was born in 1876 in the small town of Saint-Pierre-Les-Auchel, Pas-de-Calais, in northeastern France. For the first thirty-five years of his life, he did not even think about art. Lesage’s only encounter with painting was a visit to the art museum in Lille.

Since childhood – Lesage barely finished elementary school – he worked at the mine, like many of his compatriots. This is how his life should have passed – hard work deep underground, Sunday masses in church, rare weekends. This is how his father and grandfather lived, this is how everyone around him lived.

But one day, while working, he heard a voice. Looking around, Lesage saw no one – who had called him? Then, on reflection, the miner realized that spirits had come into contact with him, and more specifically, the ghost of his sister, who died at the age of three years. Under the influence of these whispers, which, however, became louder and more insistent, Lesage began to do what he did not expect of himself – to paint.

The spirits explained to him where artists acquire materials and tools, what paints and brushes should be bought, how to stretch the canvas, primer, apply strokes. So yesterday’s miner woke up as an artist.

Now, after a long shift, he was in a hurry upstairs not to see his wife as soon as possible and to feel overhead not the heavy arches but the infinitely distant sky. He dreamed of picking up a brush and mixing colors on a palette.

In 1912, Lesage began the first extensive and ambitious work – three by three meters, many elements. He worked on its completion for two years. They say that he bought a larger canvas due to his low literacy – but it was the large formats that later became his hallmark.

At first, Lesage was frightened and confused. He never had before created pictorial images. Even more so did not even think about painting a picture of this size. But voices supported him along the way. “What should I draw? I’ve never done that!” he repeated with concern.

And I received the answer: “Do not be afraid. We are close. One day you will become an artist.” Listening to this encouraging whisper, Lesage took up brushes and paints, and complex compositions full of unusual small details appeared on the canvas as if by themselves. Lesage did not make any preliminary sketches; no sketches did not even mark the canvas. Everything seemed to happen by itself.

Lesage was drafted into the army during the First World War, but he did not stop painting there either. First, he painted postcards with his psychedelic patterns. Then, in 1916, he returned to large-format painting, and in the twenties, he finally left the mining industry.

The former miner has gained particular popularity in contemporary art collectors’ circles and among the eager for oddities of the Parisian public.

The Dadaist artist Jean Dubuffet, one of the first researchers and collectors of the works of self-taught artists, could not help but be carried away by the results of Lesage.

Thanks to Dubuffet, a steadily growing interest in the work of “outsiders art collection” – artists with mental disabilities who had not received a professional education-arose. Dubuffet saw something inspiring in their awkward but expressive drawings, something capable of giving art to “gallery” a new vector of development.

Ancient oriental ornaments, claustrophobic spaces, and haunting rhythms of Lesage’s works, coupled with his unique life history, could not leave the Dadaist indifferent, and he bought several canvases for his extensive collection.

Naturally, the work of Lesage also fell in love with fans of spiritualism, of whom there were many in Europe after the First World War. His first patron in these circles (and in a sense, a manager) was Jean Meyer, editor of a magazine about the paranormal. This is how Lesage began performing in sessions as a medium.

In spiritualistic societies were not only “city madmen” and grief-stricken relatives of those who perished in the hell of the First World War, but also famous and wealthy people. It was enough to have patrons from among them and anticipate their thoughts and desires to live comfortably.

Lesage already evoked deep sympathy among the rich, charmed by the ghosts, and then he began to sign his works with the names of famous artists, claiming that their spirits were driving his hand.

Sitting in front of a colossal canvas, Lesage sank into a trance – watched by researchers and curious spectators, fascinated by his “spiritistic art.” Then, in 1927, he underwent an examination at the International Metapsychical Institute. Dr. Eugene Austin, a staunch opponent of spiritualism, was dissatisfied. He could not refute the influence of “spirits” and “voices” on Lesage – but he also found no reason to recognize him as a madman.

At the same time, the medium met the famous French Egyptologist Alexander the Great. And now Lesage’s canvases are filled with references to Ancient Egypt, recognizable ornaments, signs resembling hieroglyphs (along with Zoroastrian, Tibetan, and Mesopotamian symbols)… He confidently declares himself the reincarnation of an ancient Egyptian artist and magician.

However, by the 1930s, the enthusiasm for spiritualism began to decline. Many critical and revelatory texts appeared (for example, the famous magician Harry Houdini was actively exposing charlatans). The careers of many “mediums” were ruined, and their patrons were ridiculed. However, Lesage continued to paint until he died in 1954. Nowadays, there is a new round of interest in his work.

The phenomenon of magical paintings by Augustin Lesage – and there are about eight hundred of them! – so it was not explained by anyone. Some believe that the artist had schizophrenia, others see in his painting a metaphor of hard work deep underground, and still others… still know for sure: he was talented, and that’s enough.

These were the six most remarkable buildings of 2018

Can we see Wolverine in ‘Avengers: Endgame’? Google thinks so