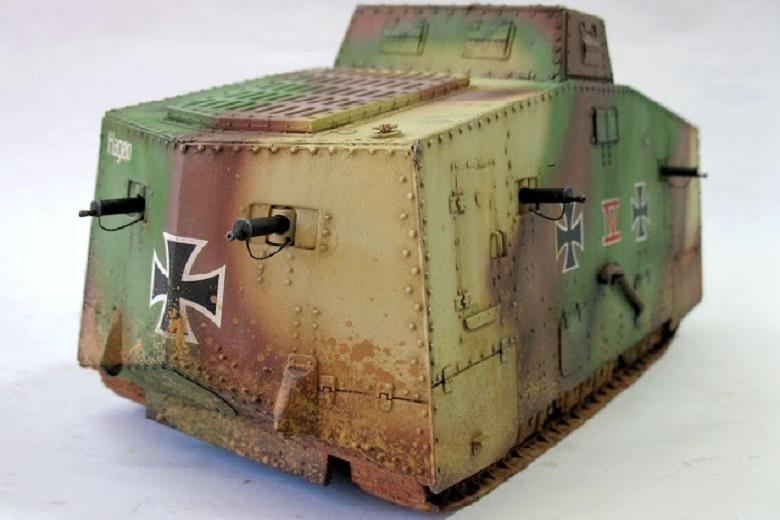 The Museum of Queensland (Australia) exhibits a unique exhibit – the last surviving German tank A7V Sturmpanzerwagen from the First World War. Even more surprising, of the 100 years that the tank has turned, 98 years he spent in Queensland.

A total of 21 such tanks were produced simultaneously, and today there is only one “lucky”. We are talking about the A7V (Sturmpanzerwagen) No. 506 “Mephisto” – a German tank from the First World War.

They thought about creating their tank in Germany after the first British tanks entered the battlefield. The Germans urgently created a technical committee that was supposed to develop their tank. And it appeared in the fall of 1917. But only 2 dozen tanks were produced (although 100 were ordered), while England and France had about 2,000. Therefore, German tanks did not bring any turning points in the course of the war.

The developer of the tank is considered to be Joseph Vollmer. The gloomy German genius gave birth to a combat vehicle weighing about 30 tons based on the Austrian Holt tractor. The tank could accelerate to 12 km / h, could cross ditches up to 1.5 meters wide. It had the main cannon with a caliber of 57 millimeters and five MG-08 machine guns with a caliber of 7.92 millimeters. The tank was named 7 Abteilung, Verkehrswesen (A7V). Sturmpanzerwagen, which means “assault armored vehicle”.

It should be said that immediately after the tank entered the battlefield, serious shortcomings were revealed. The bottom and roof of the tank turned out to be too thin. They could not even withstand the explosive force of a grenade and artillery shelling – and all because steel was used instead of an armored alloy. Another problem was the insufficiently high ground clearance, due to which the tank could move without problems only on flat terrain.

The surviving A7V Sturmpanzerwagen took its first battle on March 21, 1918, and its last battle took place on April 24, in the Villers- Bretonneux area – the combat vehicle was trivially stuck in a crater. The crew, which consisted of 18 people, left the tank, and Queensland soldiers captured this 33-ton colossus from the 26th battalion.

It is worth noting that this task was not an easy one – the soldiers had to clean up the tank in the neutral zone under German fire and streams of poisonous gas.

The German tank was towed to the enemy’s rear and then sent to Australia where the iron monster immediately became a tourist attraction. Each soldier strove to be photographed for memory at the “Mephisto”, and this raised their morale – after all, the iron beast was conquered.

After the war, the tank spent several decades in an open area in the Old Museum Building Brisbane, and only in the 1990s was it moved to the Queensland Museum. In 2011, Mephisto was covered in mud during a flood and needed restoration. For a time after that, he was exhibited at one of the war memorials, and the loan was returned to the Museum of Queensland.

It is worth saying that the Germans have repeatedly tried to return the only remaining “Mephisto” to their homeland, but the Australians are in no hurry to return the trophy. The combat vehicle is currently in a hangar near the city of Brisbane (Australia) and is placed in a cocoon polyethylene that protects the vehicle from negative environmental influences.

The bloodiest wars in history recounted by the National Interest

In Africa, Sergei Lavrov and Rex Tillerson “avoid each other”