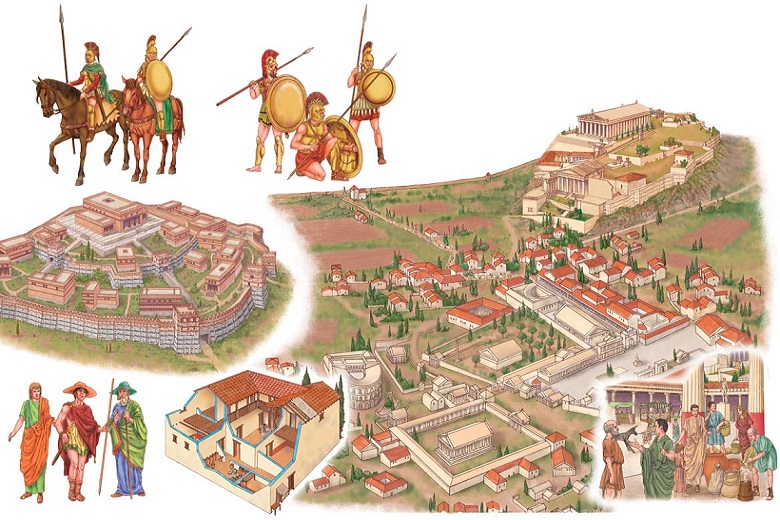 In those days, beautiful statues were created, the Olympic Games began to be held, then the theater was born and developed, schools of thought, the cult of a healthy body, unique architectural structures. Is it possible to return to those times and live according to ancient rules and in cities created in the likeness of ancient Greek polis? Unfortunately no.

Polis is not equal to the city

The notion of a polis is more complicated than just a “city living as a separate state.” The first polis arose in the archaic period of the history of Greece, from the VIII century. BC e. existed during the classical period and began to fade into oblivion with the emergence of the empire of Alexander the Great (Hellenistic period). The polis has existed much longer than many modern states exist, and the values and those rules on which life in the polis was based turned out to be even more stable.

Indeed, these were independent and autonomous settlements possessing many state features – they even minted their coins in the policies.

Citizens themselves managed such a settlement. All important issues were resolved at general meetings. The polis had its armed forces, and the ownership of land and other property could be communal and private; in the first case, the citizens themselves decided the fate of the object of the law.

More than a thousand – so many polis were counted by scientists in the entire history of such communities; each included an average of five thousand citizens (which did not coincide at all with the number of people living in the polis). There were exceptions, for example, the Athenian polis in specific periods of its history reached the mark of one hundred thousand citizens, occupying a considerable territory for ancient times.

Trade with other polis, conquests, and other ways to improve their economic position for the ancient polis was a secondary matter. These city-states strove for autarky – complete self-sufficiency, which means that everything in the policy was subordinated, first of all, to maintaining a comfortable life for their citizens. And this goal was achieved not at all using slave labor, as one might assume.

What was located inside the polis and outside its walls

The territory of the polis was surrounded by walls that protected the citizens living in it from outside attacks. And around, behind these walls, there was a Chora – a suburb, an adjacent territory designated for agriculture. The Chora occupied a much larger area than the “city” part. Those citizens engaged in agriculture-owned plots – olive trees, grapes, grain crops were grown there.

Domestic slaves, freedmen, and foreigners were involved in the cultivation of the land – none of them had the status of a citizen. However, agricultural production was still the labor of community members, usually working in families. Buildings could be located on the territory of the allotment, but citizens, as a rule, lived within the city walls, going to their lands to work.

Artisans represented another category of citizens of the polis – they produced everything that the inhabitants needed. Trade was carried out in the market square, which was one of the parts of the Agora- the center of the polis, an ample open space where all issues of community life were resolved.

The Agora housed temples and workshops, including the premises where sculptors worked – for example, Phidias and Praxiteles created their masterpieces in the Athenian Agora. They gathered here to solve political issues; the main events of the policy, including religious festivals, were held here.

Each of the ancient polis had its cults; often, one of the gods was endowed with the title of the patron saint of the polis. All religious rituals and traditions were carried out at the expense of the polis itself and its discretion – there was no single order of worship of the gods for the ancient Greek world.

The acropolis was erected at the highest place (translated as “upper city” it was a fortified sanctuary, often with a sacred spring. The most famous acropolis was again the Athenian one, on which the ruins of the Parthenon, the temple of the goddess Athena, were preserved.

The cult of health, physical beauty, and strength, widespread throughout Hellas, led to gymnasiums in the polis – institutions where young men trained in various types of ancient sports and received reading and writing skills, which was still secondary to physical education.

At first, the gymnasium was just an open square area, surrounded by poplars around the perimeter; then, they began to build premises for each type of physical exercise.

Theaters were also built in the polis. The Greeks valued the spoken word much higher, preferring it to the written one. The art of telling stories led to the emergence of a new type of art – tragedies, stories about heroes, and their struggle against fate.

Who was not covered by the benefits of the polis

For a citizen of the polis, his belonging to the community was the most important way of self-identification. Before calling a person’s name, they pronounced “Athenian,” or “Theban,” or another definition corresponding to his small homeland. However, not all people living in the city were considered full citizens.

For example, some of those who had personal freedom, freedmen, or those who came from another polis, received the status of markers and could not participate in decision-making. Several actions, for example, participation in court, were carried out only through the mediation of a citizen.

Women had a special status. Speaking about free citizens of the polis, participating in general meetings, making political decisions, attending gymnasiums, it should be borne that this applies only to men. The woman is the keeper of the hearth, and she should not appear in public places, such as the ancient Greeks’ worldview. An exception was visiting the market – the so-called “women’s agora” – and big holidays, like the games of Panathenaea in the Athenian polis. Women even became participants in a solemn procession.

In the Hellenistic period, there was a decline in the polis organization of communities; many city-states lost their independence, submitting from now on to the king’s authority and retaining self-government only partially. True, the polis culture existed for a long time; moreover, many of the peoples that became part of the empire adopted the polis rules of life.