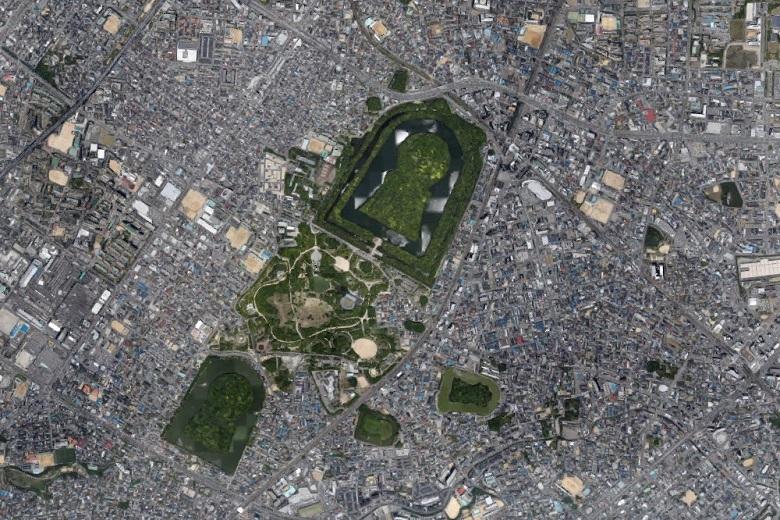 Japan is interesting because it constantly surprises people with its originality and, at the same time, with its similarity with Western culture. But what ancient Japanese burial mounds hide, and why it is worth looking into the keyhole?

It is hard to believe, but close to the megalopolises’ buildings are adjoining some semblances of abandoned groves, often occupying a reasonably large area. These are not parks, squares or gardens, but ancient burial mounds, which the ancestors of modern Japanese erected over burial chambers.

The era of Kofun

“Kofun” means “ancient grave or mound” in translation. In early Japanese society, it was customary to bury noble warriors (gozoku) and tribal elders in this way – by constructing burial chambers, where, in addition to the deceased, they left the main thing that he might need after moving to the afterlife – weapons, jewellery, and cult objects.

A mound was poured over the camera, which at first was semicircular or round, sometimes rectangular, but over time it increasingly took the shape of a “keyhole”. At the same time, the grave itself was located in the round part of such a “keyhole”, where a coffin or a stone sarcophagus was installed.

There are tens of thousands of such kofuns in Japan now; they have survived despite the centuries that have passed since their construction; despite the construction around large cities, they survived the boom of the industrial revolution.

The Japanese mounds gave the name to a whole period in the history of Japan – Kofun, which lasted from the 3rd to the 7th century and was part of the Yamato period, during which the state of the same name arose on the islands.

This was the time of military leaders; the Japanese islands then represented several dozen small states. The formation of the Kofun culture was also influenced by the Korean settlers, who may have influenced the funerary culture of Japan.

In each of the territorial entities, the power of the elders of the clan was strong, who also performed the functions of a priest and performed rituals. Therefore, an impressive list of objects found in kofuns may also have religious significance at first glance.

The Kofuns were also distinguished by a considerable number of weapons in them. More than three thousand metal blades dating from the 4th-5th centuries were discovered in the Ariyama mound. By the end of the period, an order was even issued by Emperor Kotoku to limit the number of valuable items left in the mound and limit the size of the kofun themselves.

“Serenity of the graves”

The largest is the Daisenryo kofun near Osaka – it is approximately 486 meters long and 305 meters wide. The mound reaches a height of 33 meters. Like the others, it is surrounded by a moat filled with water. This is the place where Emperor Nintoku is buried.

Kofun is not available for visiting and conducting research not to violate the “tranquillity and dignity of the grave” This rule applies to all burials of Japanese emperors. That is why there is a kind of nature reserve on the artificial island – there are rare and even unique plants and animals in this area. Visitors are allowed only to inspect the territory of the kofun from the observation deck.

The mounds were piled in tiers, in steps; as a rule, their number was from one to seven, depending on the origin of the deceased. Clay figures called Haniwa were placed on the slopes. They performed ritual functions, and in addition, kept the hill from spreading.

Sometimes the number of figures reached several thousand. Haniwa is a cylinder, which over time, in the upper part, began to give the shape of an animal or a person. The appearance of the warriors of the Kofun period is recreated by modern historians, first of all, from the found clay cylinders. There was a whole handicraft direction in Japan, the subject of creating funerary ceramics.

However, the finds inside the tombs often carried precious information for archaeologists. The Iron Age, which came to the Land of the Rising Sun, did not wholly supplant objects made of bronze, of which a significant number were discovered, including costly then bronze mirrors. It was possible to establish that the Japanese warriors began to use helmets only by the 7th century; they were absent in earlier burials.

For the first time, official excavations of the kofuns were carried out at the end of the 17th century. In the 19th century, particular interest flared up in the mounds and their secrets; many artefacts were found exported, in particular, to England. During archaeological research, the Japanese authorities turned to specialists from Europe, for example, William Gowland, a Briton known for excavating at Stonehenge.

Some of the tens of thousands of kofun

In addition to the largest kofun, Daisenryo, several other famous mounds in Japan also attract attention. One of them – Ishibutai, the alleged tomb of Soga no Umako – generally appears in the legends of esotericists and ufologists.

It was created using unique technology and is a megalithic structure – a construction of giant heavy stones-monoliths. The mountain from which the stones were delivered is located three kilometres from the kofun. Europeans, of course, are difficult to impress with the fact that rocks of incredible weight were provided at the turn of the Bronze and Iron Ages by means and technologies that have not been established until now. Instead, the very fact that this part of the world has not been without the mystery of megaliths is interesting.

Each stone that forms part of the chamber is laid so that the gaps are minimal. There are different guesses regarding kofun Ishibutai, according to one of them – for burials, this structure began to be used much later than the time when it was created; it is not known for what purposes and in what way.

Over time, the number of erected kurgans increased, and they often united in necropolises. Sometimes burial mounds were constructed next to the burial chambers.

Yoshimi-hyakketsu – a kofun containing about two hundred and thirty chambers in a tuff rock on the mountain’s southern slope – resembles a beehive. The earlier version was originally a settlement, which later began to be used for burials, was not confirmed: Kofun Yoshimi was created precisely as a graveyard.

The last large mounds in Japan were the Imashirozuka kofun near Osaka and Iwatoyama, located near Fukuoka. Their dimensions were still impressive – 190 and 135 meters long, respectively.

Since the 7th century, the tradition of burying noble dead in mounds has become a thing of the past – Buddhism spreads in Japan, and burning bodies’ custom supplants the previous one.

What Japan’s two capitals have in common: millennial Kyoto and modern Tokyo