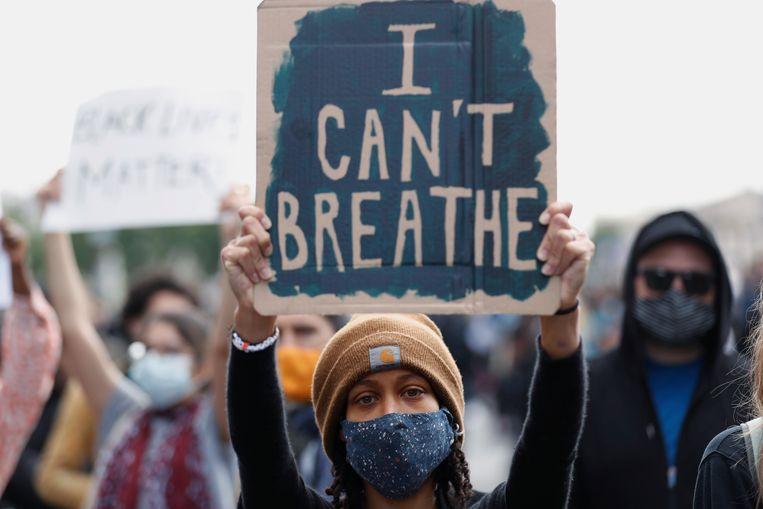 People all over the world take to the streets to express their displeasure with racial inequality and police brutality. The reason is the death of George Floyd, who died almost two weeks ago during a violent police intervention in the United States.

Floyd’s death spurred protest movements against racism and police brutality not only in the US but also elsewhere in the world: action was taken in Australia, France, the United Kingdom, Germany, the Netherlands, Belgium, among others.

Tens of thousands of people took to the streets across Australia. The demonstrators in Sydney carried banners with “I can’t breathe”, a reference to the last words of black American George Floyd. He was killed in Minneapolis on May 25 by suffocation by a white police officer.

In addition, the organizers of the demonstrations in Australia also wanted to denounce the high number of Aboriginal people imprisoned. Over 400 Aborigines have been detained in the past 30 years.

In Melbourne, where 5,000 people took to the streets, they risked fines if there was an insufficient distance between the demonstrators. In Brisbane, more than 10,000 people argued, according to police.

In Paris, there is technically a ban on gatherings of more than ten people, but that couldn’t stop a demonstration. Despite the ban, a thousand protesters gathered this afternoon at the American Embassy in Paris in memory of George Floyd. The law enforcement services were on the ground on the Place de la Concorde in Paris, where the embassy is located. Black Lives Matter protests also took place in other French cities today.

On Tuesday, a demonstration of at least 20,000 people took place in Paris. They took to the streets to support the family of Adama Traoré, a young black man who died in a Paris police cell in 2016, shortly after his arrest.

In London too, thousands of people took to the streets today to demonstrate against racism. British protesters are also ignoring official advice to avoid mass gatherings because of the corona pandemic. Interior Minister Priti Patel nevertheless stated that this was “for everyone’s safety”.

The protesters have gathered at London Parliament Square, and meetings are planned all over the United Kingdom. Police Commissioner Dame Cressida Dick says the protests are “illegal”, and Manchester Mayor Andy Burnham warns that these mass rallies pose a “high risk” of flaring the coronavirus.

Thousands of demonstrators gathered in Alexanderplatz in Berlin. This afternoon it had become so busy there that the police had to ask the protesters to stay on the side streets. The surrounding streets were closed to traffic to ensure safety.

A silent protest commemorating George Floyd took place at 2 pm. The protesters were asked to appear in black clothes.

Officially, 1,500 participants have been registered, but the police expected about 10,000 participants. In the end, there were 15,000, mainly young people between 20 and 30 years of different origins.

It started as a peaceful protest, but around 5.20 pm, the situation escalated a bit. Bottles were thrown, and a man was arrested.

Demonstrators also took to the streets in 25 other German cities. In Munich, 20,000 demonstrators are said to have turned up.

Large turnout in the Netherlands

In the Netherlands, there were demonstrations in Eindhoven and Tilburg today. In Tilburg, about 800 people took to the streets, so that enough distance could be kept. In Eindhoven, on the other hand, the Stadhuisplein quickly filled up. The action was only fifteen minutes away when the municipality told everyone to go home.

Some 700 people showed up in Liège this afternoon to show their support for George Floyd. At 2 pm, the demonstrators gathered near the Liège-Guillemins train station. Around 3:30 pm, a group of 250 people went to Sint-Lambertusplein, where they knelt in front of the Justice Palace.

The event was not formally authorized by the city council, because mass meetings are still prohibited under the rules to stop the coronavirus. But because everything went smoothly, the authorities failed. No official report has been drawn up for the time being.

In Antwerp, a Black Lives Matter demonstration attracted some 500 to 700 participants to the Groenplaats. In general, the demonstrators followed the distance rules well. Social media and flyers called for participation in this promotion last week.

According to the local police, the organizers had announced in advance that the participants would be kept at a safe distance from each other. “Those who did not adhere to the corona measures were addressed. In general, however, the demonstrators adhered to social distancing.” Partly because of that distance rule, the Groenplaats was well filled this afternoon.

In Kenya, there was a protest in the US embassy, and former African present has firmly stand against the police brutality and killing of Africa America in the US, adding that “enough is enough”.

In Brazil, there is unrest against police brutality on black people. It is peacefully in Brazil, and demonstrators have been raising their voices against the killing of black people, mainly in poor neighborhoods.

The favelas figures released by the Rio de Janeiro public security Institute show that killings by police have increased to record levels in recent years. Hundreds marched on the city’s outskirts to draw attention to what they see as Brazil’s shame. “Every 23 minutes in the world, a young black person dies. We have to fight because that if we don’t fight, that will continue, and we will keep dying,” some of the demonstrators said.

In Mexico, masked demonstrators vandalized buildings and threw stones at the US Embassy in the capital. Protests began there on Thursday after the death of a young man in Jalisco state. He was allegedly beaten to death in a police station for not wearing a mask.

Authorities have now announced the arrest of three officers of the man’s death, but that hasn’t stopped the protests. According to some protesters, “we’re here in support of the great uprising of the black people and of all colors for the crime against George Floyd committed by a big policeman of the United States”.

This movement is not just about showing outrage at the death of African American, George Floyd, in the US. The black lives matter movement has unleashed a wave of protests against racism worldwide. Demonstrations are continuing this weekend with demonstrations held in East Asia in large crowds.