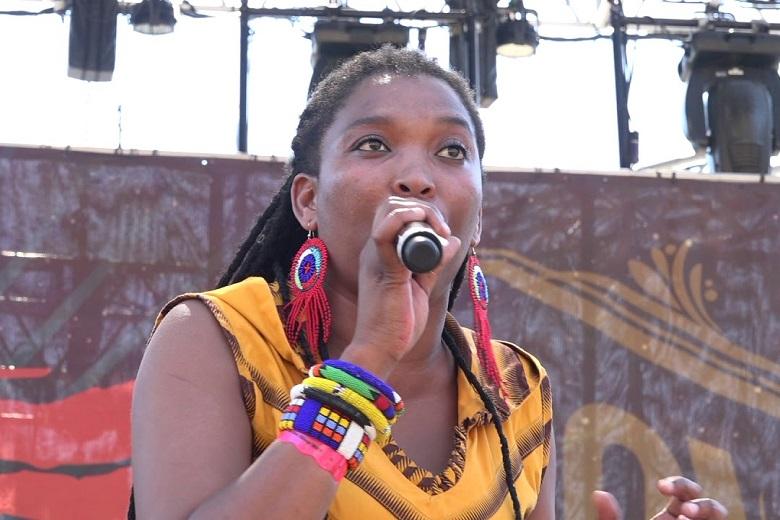 Nkulee Dube is one of the rising stars of Reggae in Africa. The singer-songwriter, performer, and dancer navigates between Jazz mixed with Soul and spiced up with Reggae. Her approach is both nostalgic and innovative.

Nkulee Dube wants to preserve her father’s musical heritage, Lucky Dube, killed on October 18, 2007, near Johannesburg, South Africa. An approach that reminds African music lovers of the hours of Dube, marked by Reggae that is both danceable and educational.

With microphone in hand, soft voice, and dreadlocks, the 35-year-old artist knows his role: Honouring his late father’s memory, who left his mark on more than one African. “When I travel around the world, people tell me: We are happy that someone is taking over and putting on your father’s shoes,” Nkulee regularly repeats during her interviews. “Obviously, I’m going to keep my father’s roots. I am part of this Reggae story.”

Aware of her talent, Nkulee is doing well in the Reggae music scene in her native South Africa and Jamaica. Her gestures, dance steps, and performance style make her one of the women to watch closely. Her successful performances in Germany, Burkina Faso, Guyana, the United States, Jamaica, and Surinam bear witness.

Highly disciplined like her late father Lucky Dube, she has already shared the stage with artists such as Tosh Meets Marley and Warrior King and is an “ambitious” and “outstanding” artist.

She is the holder of the “Most Promising New Entertainer” award, a recognition for her rise in this musical genre. And when she talks about her father, Lucky Dube, she describes a strict character and a lover of a job well done. Characters who have marked the life of the Raggaewoman. “I grew up with Jazz. I’d like to go wherever Lucky Dube went”.

Fascinated by live music like her late father, the author of the albums “My Way” and “Journey”, is preparing a world tour during 2021. According to her schedule, Nkulee Dube is expected to visit Germany, the Netherlands, France, and England.

3 thoughts on “Rising of late Lucky Dube: Nkulee Dube in her father’s footsteps”