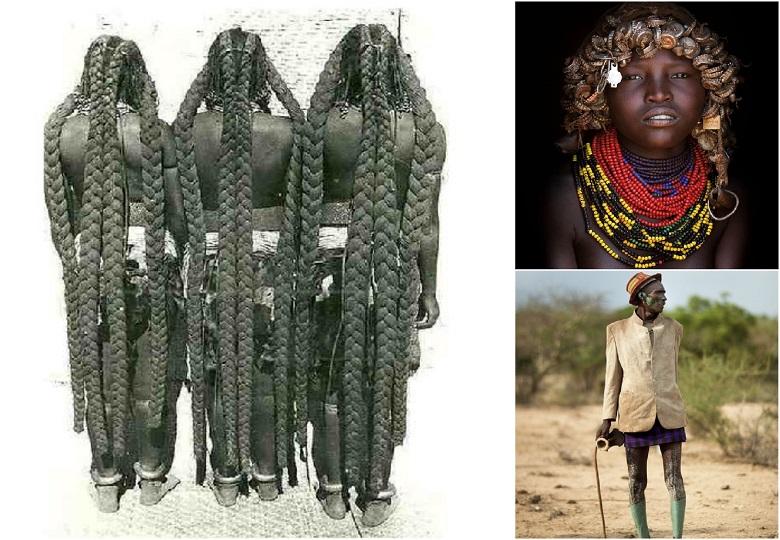 In the fashion world, Africa also has their space. Still, not much is known about the fashion of the great and mysterious content—overview of some strange and unpopular photos of African fashion styles.

Photos from different tribes, or sometimes the most remote corners of the world, allow you to learn about the most unusual and unexpected fashion trends. In this article, we will focus on African tribes and the peculiarities of local fashion.

Among the women of the Mbalantu tribe from Namibia, a hairstyle called “Eembuvi” has been popular for centuries – weighty thick braids up to the heels. To acquire such braids, girls stop cutting their hair at the age of 12, and for their hairstyles to grow more intensively, they apply a mixture of finely crushed tree bark and oil to their hair.

When the hair reaches a certain length, they begin to braid them. They simply put the braids into unimaginable hairstyles. It was after the world first learned about African hairstyles that African braids became popular in the 90s.

A man from the Hamar tribe must jump over 10 cows without ever falling to obtain permission to marry. They wear their best clothes for the wedding, as this event is considered very important.

At the same time, the grooms cover their feet with green paint made from special clay, which is very expensive. This is how a kind of green tights are obtained. The groom’s friends can only use white clay.

The Dasanech people collect Coca-Cola and beer caps from Omorate bars and make wigs from them.

Dassanech has always been a nomadic pastoralist. However, despite the age-old traditions of cattle breeding, now their main occupation is growing crops on the swampy banks of the Omo River.

The Bena and Hamar tribes have a lot in common. Once a week, the bens go to the market in the town of Key Afer, where they put on their best clothes. At the market, they buy up cheap utensils that are brought here from China.

Ben’s teenagers love to combine age-old traditions with modernity in clothes. Although, adults are gradually starting to do the same.