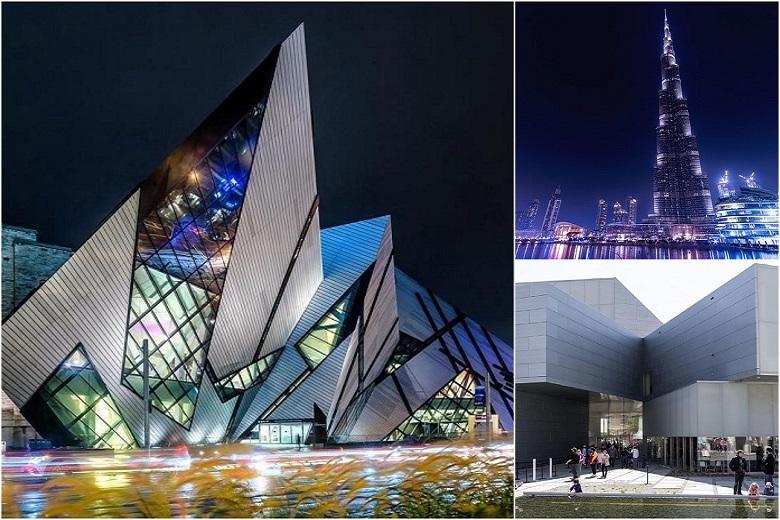 The name of the exhibition center, opened in Danish Nordborg, speaks for itself: translated from Latin “Cumulus” means “cumulus cloud”. This extravagant structure looks like: it resembles a cloud from which a bite has been bitten off.

The Danish center “Cumulus” was designed by the German architect Jurgen Mayer and, despite its “foreign” origin, harmoniously fits into the local park landscape. The metal facade of the “cloud” seems to grow out of the ground, changing the park’s horizon. Danish “Cumulus” became famous as a “center of curiosity”.

Here, children and adults get acquainted with the phenomena of nature and the achievements of science in a playful way, and exhibitions are held in this building in winter.

On January 4, 2010, the inauguration of the Burj Khalifa, the tallest building that has ever existed globally, took place in Dubai. This skyscraper, with a height of 828 meters, was built in just six years. The 163 floors of Burj Khalifa are connected by 57 high-speed elevators and eight escalators. The 37 lower floors are dedicated to the hotel, and 700 luxury apartments are located on floors 45 to 108.

Most of the premises are occupied by offices and shopping centres. Moving at a speed of 18 meters per second, the Burj Khalifa elevator will take a tourist to the 124th floor in less than a minute, where an observation deck is located at an altitude of 505 meters. Glazed from floor to ceiling, At the Top provides a 360-degree view. Special telescopes are also installed here, with the help of which everyone can take a closer look at the city.

London’s most famous stadium, Wembley, reopened in 2007 on an old one that was demolished in 2003. It is here that the England national football team plays, and the finals of all national cup tournaments are held.

The modern Wembley is the second-largest stadium in Europe and can seat 90,000 fans. An openwork 130-meter arch rises above the arena, supporting a sliding roof. In 2012, Wembley host the Summer Olympics football finals. In addition to football matches, the stadium hosts concerts of world-famous stars.

The New Museum of Modern Art in New York houses one of the world’s most enormous 20th-century masterpieces. Among the 100,000 exhibits, you can see such legendary works as “Starry Night” by Van Gogh, “Dance” by Matisse, “The Persistence of Memory” by Dali, etc.

The museum building worth $ 425 million was rebuilt in 2004 by the Japanese architect Yoshio Taniguchi. This structure looks like a jumble of six huge parallelepipeds stacked on top of each other. The blocks are covered with a metal mesh, symbolizing the new aesthetics of transparency and democracy in the museum. Inside the museum complex, there are spacious halls, offices, and a multimedia educational center laboratory.

There is an ornamental garden on the roof of the museum, which traces the features of Japanese gardens with a minimum number of plants.

The structure of the canopy is made in the form of waves through which the courtyard is filled with sunlight. The roof is supported by 8 columns located around the perimeter.

The yard is adorned with figs, olive trees, and ferns, planted in huge pots of white marble. The atmosphere is complemented by 4 fountains flowing in thin streams over the granite slabs of the floor.

In the period from 2005 to 2008. in the vicinity of the Chinese city of Qinhuangdao, an original design project called “Red Ribbon” was implemented. Against the park’s natural vegetation backdrop, landscape architects installed a scarlet steel bench along the riverbank. Curving like a snake, the bench crosses almost the entire Tanghe Park.

At night, the “Red Ribbon” is illuminated by built-in lamps. There are flower beds and flower beds in the steel holes of the bench, and along with the “ribbon” itself, there are four pavilions designed in the shape of clouds.

The museum’s architecture also deserves attention: the renovated part of the building, designed by Daniel Libeskind, resembles a massive crystal in shape. The walls of crystal are built of metal. Initially, the primary material would be glass, but since sunlight is harmful to the exhibits, this idea had to be abandoned.

Vikings were the first Europeans to set foot in America, precisely 1,000 years ago before Columbus

Why is there a Cross on Mount Royal? and why did Paul de Chomedey fulfill his promise to Virgin Mary?

Released Huawei top woman welcomed as a hero in China