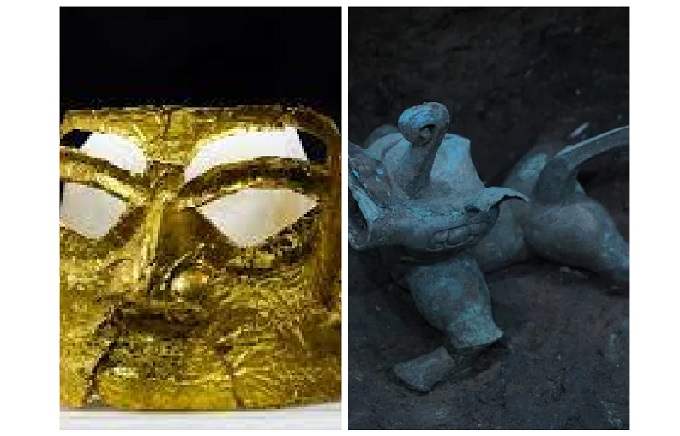 In the Chinese city of Guanghan, not far from the capital of Sichuan province, Chengdu, are the ruins of the ancient city of Sanxingdui. They are considered one of the most important archaeological discoveries of the 20th century. Excavations have been going on here for over 100 years. Scientists are constantly discovering more and more treasures and valuable artifacts. It seems that there will be no end to rare relics.

Recently, archaeologists have found unique items dating back to the 12th century BC. They impressed the experts with their historical value, as well as the manifestation of creativity and ingenuity.

The Sanxingdui treasures were first discovered in 1920. In 1986, scientists discovered two huge sacrificial pits that belonged to the Shang Dynasty (1600-1046 BC). During the excavation of these pits, thousands of rare treasures have been found.

The Sanxingdui ruins were inscribed on the UNESCO Tentative World Heritage List. Excavations have not stopped there for over a century. Archaeologists are unearthing more and more relics.

Researchers at the Research Institute for Cultural Relics and Archeology of Sichuan Province in China announced the discovery of 1,771 relics at an excavation site in the ruins of Sanxingdui. Invaluable finds include a bronze mask and statues, ivory carvings, and a unique gold mask.

The golden mask was found this summer. It took some time to restore the artifact in all its glory. The relic was in pretty good condition. The object’s width is about forty centimeters, the height is slightly less than twenty, and the weight is 100 grams. The news of this important discovery was officially announced in September. According to experts, a mask is not a separate object. It is most likely part of a bronze statue discovered right there. The sculpture depicts some ancient Chinese deities.

Together with a unique golden mask, archaeologists have discovered more than three hundred statues and one and a half hundred elephant tusks. A treasured rare find is a statue of a man holding a ceremonial vessel called a “zun”. A large bronze mask was also found, the largest ever found in Sanxingdui.

All artifacts are unique in terms of their decorative patterns and shapes. They give scholars a completely new understanding of the ancient world’s art, religion, culture, and social relations in society during the Shu dynasty.

Discoveries have once again demonstrated that modern people’s ideas, knowledge, and skills are significantly inferior to the imagination, skill, and creativity of their ancestors.

The Shu kingdom was one of three in the region now known as Sichuan. This ancient civilization is about 5000 years old. Sanxingdui is the center of a powerful state of the past. All the relics found indicate that the kingdom developed completely independently of other societies. In general, the Yellow River Valley is considered the cradle of the entire Chinese civilization.

Radiocarbon dating has shown that all of the sacrificial pits are between 3000 and 3200 years old. These were the times of the late Shang dynasty. The period ended in 1046 BC. The Sanxingdui ruins cover a vast area. The most interesting thing is that they were discovered at one time by an ordinary peasant. He decided to dig a sewer ditch and accidentally stumbled upon jade and stone artifacts.

At the site of the Sanxingdui ruins, archaeologists constantly excavated. A real breakthrough in the history of this place happened only in the 80s of the last century. It was then that two large sacrificial pits were found, the remains of the city walls. In the pits, scientists have discovered more than a thousand artifacts, including several bronze masks.

And just recently, at the beginning of this year, tremendous discoveries continued. The last of them are the remains of fabrics, another golden mask, and a bronze vessel with an ornament in the shape of an owl.

The ancient Chinese kingdom of Shu is an outstanding representative of the bronze civilization of the Yangtze River Valley. It is an incredible result of the interaction and integration of many different cultures. Sanxingdui is of global importance in the history of East Asia and the entire world and human civilization as a whole.

Now, most of the items found in Sanxingdui are on display at the local museum.

Snow Woman from Abkhazia: story of mysterious Zana, whose descendants live in Caucasus

Why do Ancient Egyptians give birth often in March and April?