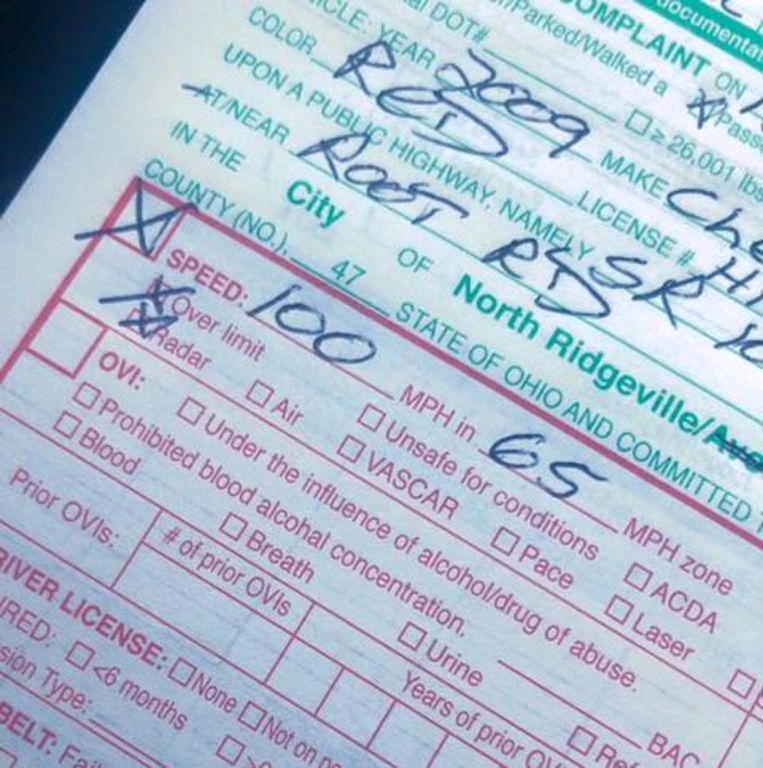 An 18-year-old American speed demon who tore the track at 160 km/h in the state of Ohio, was fined. Then the agent of service also wrote to him a striking, endearing letter that praised the Internet community.

The North Ridgeville Police Department from Ohio posted the striking message on Facebook. In it, the agent warned the teenager about the risks of his irresponsible driving behaviour. This is the complete letter from the policeman for the 18-year-old reckless pilot.

You’re welcome. I think you were only a few minutes away from causing an indescribable Christmas tragedy when I stopped you. You could not only drive yourself to death, but you were also well on your way to kill an innocent person who did not stand with you and did not do anything wrong except for you.

You said you did not realize how fast you went. That’s a lie. You may not realize it when you drive 70 in a zone 55, but at 160 you are fully aware of every kilometer per hour. You feel it on the road with every bump. You realize when you pass other cars at such a speed that the wind moves your car. You feel every time you cross your line and you send that your car reacts much faster than you are used to. You are therefore absolutely aware of it.

You were scared when I stopped you. You were visibly shaking and breathing heavily. Unfortunately, you were scared a minute late, and for the wrong reason. You should have been afraid because you were trying to bring yourself. I know you are invincible. I know you can not even grasp your own death.

I can tell you dozens of stories about dead and mutilated 18-year-old bodies that I dragged out of cars. Mutilated bodies that I have found in front gardens after accidents. Unrecognizable bodies. They too thought they were invincible. They were not. They were no longer there, so they missed the part where I had to tell their parents that they were dead. A part of your soul disappears every time your parents have to tell you that their child is dead.

I do not know your parents, but I know who they are. I know that every time you leave, they tell you, “Careful. Drive safe”. These are not just words. That is the last time they can beg you to come home safely. If there is a knock on their door, it does not come from: “Good afternoon, ma’am. Your 18-year-old son just got a huge heart attack.” It goes like this: “Can we sit down? Your son has been involved in a very serious crash. I’m very sorry. He died”. When you leave the house, they know that in that car you are most likely to die that day. Sometimes you are the innocent person who is touched by someone else who is not involved with others, and sometimes you are the one who is not involved with someone else. Today you were the last one.

You seemed like a very nice guy, who made a wrong decision. I have no problems with the fine at all. I am even proud of it. I hope that you have to pay them for months and that every payment you think is not worth it. I hope you will drive slower. I hope that when your mother asks you to ‘drive safely’ your hair and you promise that you will do it too. I hope you can imagine that I would sit in your kitchen to tell your screaming mother that you were killed.

Slow down. Please. You are not invincible. I guarantee that.