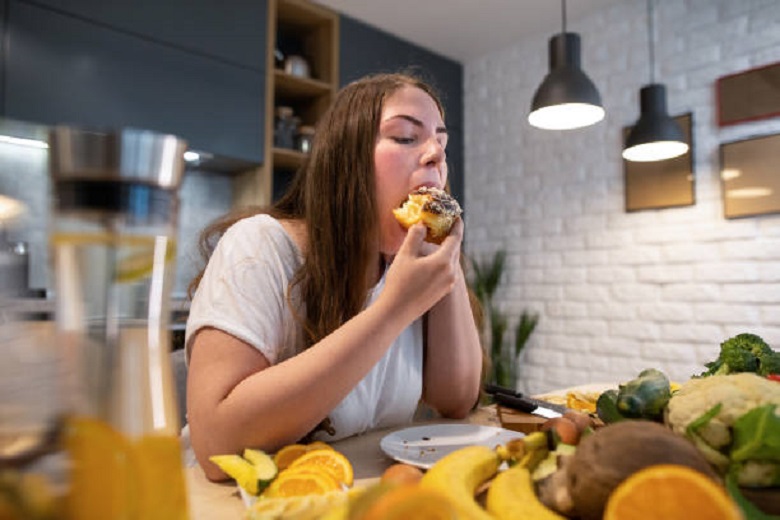 Eating disorders are severe and often life-threatening illnesses that seriously disrupt a person’s eating behaviors. Obsessions with food, body weight, and fitness can also signal an eating disorder, types of eating disorders, their impacts on health, and more.

What you should know about eating disorders:

What types of eating disorders are the most common?

There are a host of different eating disorders. We also want you to understand that only psychologists, psychiatrists, and doctors can diagnose this. However, learning more about these disorders can help you better understand what is happening to you. Here are some characteristics of the most common eating disorders:

People with anorexia often lose a lot of weight by having rigorous control over the amount of food they eat. Sometimes they have particular rules regarding nutrition and exercise, and they may have a distorted body image. Although medical professionals consider their weight to be below average for their age and size, they consider themselves more significant. No matter how much weight these kids lose or how thin they are, they often think they still have a way to go.

Other signs that may develop over time include:

People who have bulimia will often ingest large amounts of food and purge themselves (or eliminate the food consumed). They can purge themselves by making themselves vomit, taking laxatives, exercising excessively, or limiting what they eat. Young people with bulimia often feel out of control when they eat and then feel shame and guilt.

Prevalence and age of onset

Eating disorders usually appear in adolescence or adulthood but can also develop in childhood or later in life. These disorders affect both sexes, although rates in women are higher than in men. Like women with eating disorders, men also have a distorted body image.

What are the effects of eating disorders on health?

Eating disorders can have short- and long-term health consequences. For example, restricting your diet, eating excessive amounts, purging yourself, or exercising a lot can cause:

In addition to the physical effects, eating disorders can have negative consequences for the way you feel. These disorders can also have an impact on relationships (friends and family). For example, an eating disorder may make you want to spend more time alone and isolate yourself from family and friends (especially during meals).

Why do people develop eating disorders?

Current research indicates that eating disorders do not have a single cause. Various factors can influence the development of these disorders:

Various factors can put young people at higher risk of developing an eating disorder, including:

At the very beginning, an eating disorder may resemble a diet. What may seem like a small weight loss goal can turn into excessive dieting and an obsession with losing more and more weight. We speak about weight loss and how it sees in the media, and advertisements can make young people prioritize importance, appearance, and height over health and wellness.

Young people who have low self-esteem may not like themselves and think they are not good enough or inferior. Losing weight can seem like a way to feel better.

The body image is how you see your body. When people have poor body image, they can focus too much on changing their bodies by controlling their diet, weight, and physical activity level. A negative body image can also make it easier for a person to believe messages they see in popular culture (e.g., social media, TV, and music videos) about what they should have. ‘air.

A sudden or challenging experience, such as losing a close friend, having a family member with a severe illness, going to a new school, or being the victim of abuse/assault, can put a person at increased danger of developing an eating disorder.

Some people can develop an eating disorder as a reaction to challenges in their daily life. Things like family issues, body changes during puberty, social pressure, and school-related stress can reduce eating disorders.

If you think you have an eating disorder, you don’t have to deal with it yourself. You can talk to a trusted adult such as a doctor, teacher, or clinical worker.

Proper nutrition, reducing excessive physical activity, and stopping purging behaviors are the pillars of treatment. Medication plans are tailored to individual needs and may include one or more of the following:

Psychotherapies such as a family therapy called the Maudsley Approach, where parents of adolescents with anorexia nervosa take accountability for feeding their child, appear to help people gain weight and improve their eating habits moods.

To reduce or eliminate binge eating and purging behaviors, people can pass Cognitive Behavioral Therapy (CBT), which is another kind of psychotherapy that helps a person learn to identify distorted or unnecessary thought figures and recognize and change inaccurate beliefs.

Evidence also suggests that drugs such as antidepressants, antipsychotics, or mood stabilizers approved by the United States Food and Drug Administration (FDA) may also help treat eating disorders and others. Concomitant illnesses such as anxiety or depression.

How to start a new life today instead of Monday?

3 bad habits that are holding you back in your career