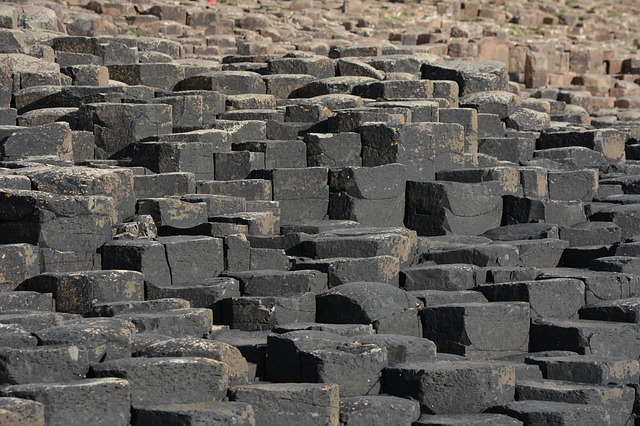 The Giants Causeway, or, as it is also called, the Giant bridge, is perhaps one of the most mysterious places on Earth. According to scientific theory, this incredible structure in Northern Ireland, which is flat and similar to huge pavement megaliths, was created by nature itself. But the locals who believe in ancient myths and legends have a completely different opinion. In any case, the Giants Causeway is simply stunning.

If you go to the northeastern part of the country, you can see this amazing carpet made of “cut columns” of different heights, similar to paving stones. The wonder of nature is located on the coastal edge of the Antrim plateau. Each stone here is a surprisingly clear polygon (most often with five or six corners) with unnaturally straight sides. The pillars vary in length and rise out of the sea, gradually increasing in height until they reach the top of the cliff.

The photographs taken by tourists amaze with their beauty and mystery. However, at the sight of this “Causeway”, the question immediately arises: where did it come from?

How was the Giant’s causeway formed?

According to the scientific version, the Giant’s Causeway is nothing more than a natural monument. It is just 40 thousand interconnected “columns” of basalt and andesite (igneous volcanic rocks) tightly connected. As people far from mysticism and based solely on scientific facts, scientists argue that this pavement was formed as a result of an ancient volcanic eruption that occurred here 50-60 million years ago, during the Paleogene.

Why is the Giants causeway hexagonal

During the intense volcanic activity, molten basalt rose up through the chalk strata, creating what is now known as the volcanic plateau. Then the lava began to cool and shrink, which caused cracks in the rock. As the lava flow continued to cool, it retreated, leaving behind tall columns, thus hexagonal. In the place where the lava cooled very quickly, it left behind especially noticeable and large columns.

Research in this area has helped scientists and geologists to better understand the geological history of the Earth, both in Northern Ireland and the planet as a whole.

However, there is another mystical version. This history has been passed down by the locals for more than a century from generation to generation.

So, as the ancient Celtic legend says, giants lived on the coast of Northern Ireland many years ago. Once, a famous mythical hero named Finn MacCumhail or (Finn MacCool), decided to attack his enemy, the giant Goll, and specially built a bridge to get to him without getting his feet wet. But Finn did not have time to go to battle, as the enemy himself appeared to him – he moved to the side of the enemy at the moment when he was sleeping.

Meanwhile, Finn’s cunning and attentive wife noticed the enemy’s approach in time and quickly swaddled her sleeping husband like a child. She told the intruder that her husband was not there now, and their son was sleeping on the shore. Goll was amazed at the size of the baby.

Meanwhile, the hostess diligently portrayed hospitality. She baked cakes and invited the guest to taste them. The Gaint bit one and nearly broke a tooth – it was so hard. Then the woman in front of Goll gave the exact cake to the “son” who had already woken up by this time – and he ate it with pleasure. “If they have such a healthy and strong baby, then what power does the head of the family have!” – Goll was amazed and fled in fear, destroying the bridge along the way and leaving only its foundation.

The Giant did not know that in the cake that the hostess offered him, she put a frying pan as a filling and, of course, served the “son” with the usual one.

The Giants causeway is the only UNESCO heritage site in Ireland (it was included in this list back in 1986). And the Radio Times magazine in 2005, after conducting a reader poll, declared the Giants’ Bridge the fourth most crucial natural wonder in the United Kingdom.

In addition to impressive megaliths, this area is famous for its unique beauty and diversity of flora and fauna. By the way, there are excursions for visitors. You can book a room at a nearby hotel and order a guide in advance.