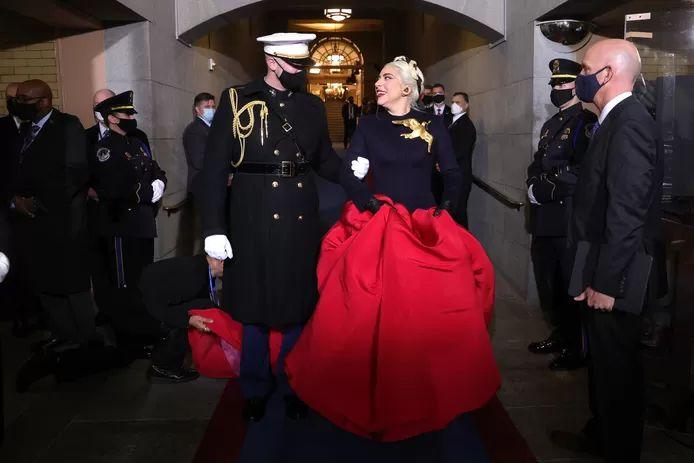 Anyone who thought that Lady Gaga had chosen her accompanist for Joe Biden’s inauguration months in advance is wrong. It was not until the day before during rehearsals that it was noticed that descending the stairs to the stage in Gaga’s long red skirt could sometimes lead to a trip. The eye fell on 30-year-old Marine Evan Campbell to avoid such a painful scenario.

Evan Campbell is from San Antonio, Texas. He was one of the Marines and soldiers serving in Joe Biden’s presidential inauguration on January 20 near the honorary guests. During rehearsals on January 19, the realization grew that Lady Gaga in her majestic skirt would be better supported up to the stage, where she would perform the American national anthem the next day.

“she was wearing this very beautiful, very large dress, and there was a concern that she might need some help getting down the stairs,” Campbell told Task & Purpose.

“So they basically looked around, and I was one of the taller, larger individuals, and they just asked if I would be willing to assist, and I was more than happy to” do that.

On the day of the swearing-in itself, Campbell helped assign former presidents and other chic people their places. Since Campbell was assigned to the White House as an army worker, he had met some celebs before, but never Lady Gaga. That happened only fifteen minutes before they would descend the stairs together. He described the singer as “very nice and gracious with everyone”.

The two talked some more, and Gaga told him that singing the national anthem was the most important day of her life. She came across as “incredibly authentic,” according to Campbell.

She also joked that they both had an equal chance of tripping over her dress. Then she asked him to pray together, a “very heartfelt,” said the Marine. Then they stepped down the stairs.

The fact that Campbell took her joke seriously can be seen in the images. For a moment, he moves his right arm out of protocol position to seek support from the banister. But ‘mission accomplished,’ and a stiff Lady Gaga (34) started one of the performances of her life.

She now has a big fan, on a personal level, that is. Campbell thinks she is “phenomenal”. He summarizes her version of the ‘Star-Spangled Banner’ like this: She wanted to do it really well that day, she wanted to sing the national anthem for all Americans. It was very moving.

Evan Campbell and Lady Gaga’s photos went around the world, whether or not they were incorporated into memes. Most proud of all, Campbell is representing the United States Navy. Millions of people have now seen a US Marine with Lady Gaga.

Campbell is therefore just happy that he made the Marine Corps proud.