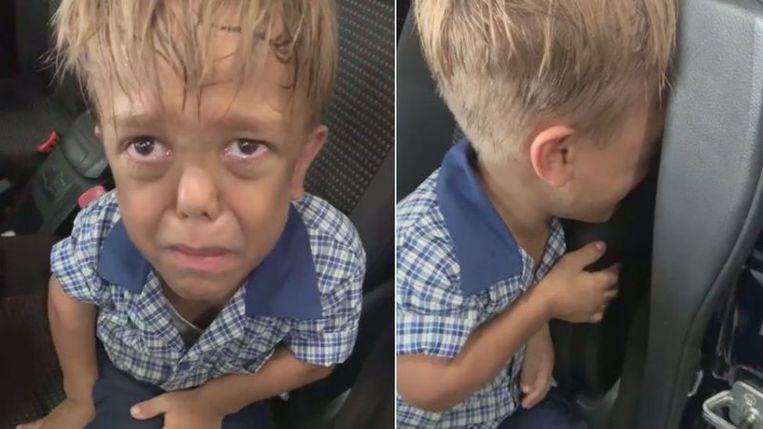 An Australian boy with dwarfism (9) is being treated so heavily by his classmates that he would instead want to die. His mother filmed one of his outbursts to show how deeply the harassment took hold of him.

The video of the Australian teenage boy with dwarfism goes through marrow and bone. “Normally, I keep these moments private, but now I see no other way out,” says Yarraka Bayles. Her heartrending cry for help does not miss its effect: Quaden can count on massive support from all over the world now that its Facebook film has been picked up by international media.

“Give me a rope, I want to commit suicide,” the boy shouts in tears after yet another incident. “I want to put myself in the heart. I want someone to kill me. I want to die now.” “Parents and teachers need to see with their own eyes what bullying can bring,” picks up the Brisbane woman. “Do you sometimes wonder why children commit suicide? Here you see the answer. Take your responsibility and properly educate your children.”

“Harassment, scolding, quarrels… The same song every day. Is there anyone who knows what to do, so that this torment can finally come to an end? I have already received some good tips, but they are not enough,” the desperate mum stressed.

Bayles clearly shows that she is powerless. “People need to know how much this hurts us as a family. All those anti-bullying campaigns… They don’t work.”

“We can’t handle this anymore. We keep ourselves as strong as possible, but it has become too much. I have to keep an eye on him; otherwise, he would commit suicide,” his mum said. “I have been on the phone with the school countless times. Pupils who are confronted with his condition for the first time immediately start teasing him.”

The mother also explained why Quaden is so upset. “When I went to get him, I saw a student patting him on the head and making “jokes” about his height. He ran to the car in full hysteria, because he doesn’t want me to make a scene on the playground.”

“It feels like I am failing as a parent, but the education system is certainly not free either. The result is that I now have a son who daily suffers from suicidal tendencies.”

Bayles also raises a warning finger. “Parents, this can happen to your child too. Or maybe your son or daughter is just the bully that pushes someone else over. And then, as a society, we lose another child to harassment. This is our reality.”

Quaden already attempted suicide when he was bare… six years old. “I was in shock,” Bayles said. “How could he have been working so hard at that age? I explained to him that what he did can be irrevocable, but he has tried it several times afterward.”

“The death of his grandfather has gripped him badly, and his younger half-brother was also born dead. He thought he would be with them again if he went to heaven.”

“Ignore the bullies, and we sometimes get advice. But that, of course, does not solve the problem. Something like that needs to be dealt with immediately. In fact, I would have to make a live video every time such an incident occurs. Hopefully, something changes now so that other families are spared from this misery.”

The brave testimony of Bayles has already provoked a storm of responses. Strangers want their children to play with Quaden. Age companions would like to become his pen friend. Expressions of support on social media are booming.

The sports world is also being heard. As a big fan of the Indigenous All-Stars (an Australian rugby team; ed.), Quaden can take to the field next Saturday with the team.

His great idol Latrell Mitchell watched a video of him. “Hey, Quaden … We know that you are in a difficult period, but remember that we all support you here. We want you to be there next weekend. Lead us to the field. It will mean more to us than to you, friend. Be tough we wish you all the best.”