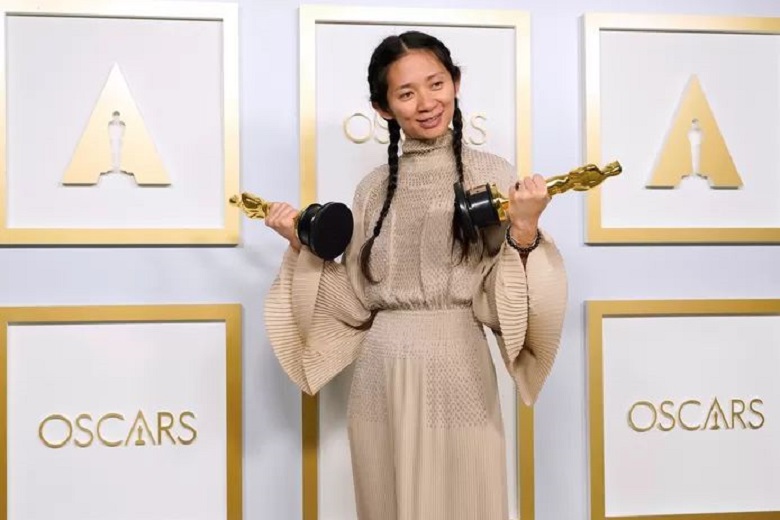 Chloé Zhao (39) wrote history on Sunday evening. She won the Oscar for ‘best director’ and is only the second woman ever to succeed after Kathryn Bigelow (‘The Hurt Locker’, 2009). In addition, she is the first Asian woman to receive that honor—high time for a portrait of a Chinese woman who has always felt like an outsider.

Chloé Zhao was born in Beijing as Zhao Ting. At the age of 14, her parents sent her to a boarding school in Brighton to learn English. “Like Hogwarts,” she said herself. Zhao impressed. “What I remember best is that she loved a challenge. In a good way,” her former teacher Alison Withers told BBC South East Today.

“She came from a different country, had a different culture, and always questioned why we did certain things. She was also willing to participate. She was obviously very smart and learned English incredibly quickly.” Zhao herself mainly remembers her time in Brighton as “very emotional. A lot of teenage anxiety, but at the same time, those were also very creative years.”

After her studies in the United Kingdom, Zhao moved to the United States. There she trained in political science. She then trained in film at the Tisch School of the Arts, where Spike Lee is the artistic director. A big switch, but not illogical, according to Zhao. “When I was in college, I wanted to learn the things in America that I didn’t really understand when I first arrived here. After that, I didn’t really do anything for a few years and had a lot of different jobs here in New York before I realized I needed to do something with my life. This is how a lot of people end up in the film school.”

Not only did she start working on her first film, ‘Songs My Brothers Taught Me’, but she also got to know Joshua James Richards. They became partners in crime – both professionally and privately. Richards worked as a cinematographer on all of Zhao’s films. “We bonded by our tastes and visual appeal,” explains Richards.

After ‘Songs My Brother Taught Me’ (about young people in a reservation for Native Americans) followed ‘The Rider’ (about a young cowboy who has his career on the rocks due to an accident) and ‘Nomadland’ (about a widow who is fired and then travels through the western United States in a camper). All films about outsiders.

“Wherever I go in my life, I’ve always felt like an outsider,” Zhao told The Telegraph. “So I’m just drawn to other people who also live on the margins of society or who don’t have an average life.”

‘Nomadland’ was an immediate success. A Golden Lion Award, a People’s Choice Award, a Gotham Award, a Golden Globe… In February, Variety wrote that Zhao had officially become the person with the most awards in one season (in modern times), with 34 awards for direction, 13 for the scenario, and 9 for editing. And then the Oscars were yet to come.

As popular as she is, there is less enthusiasm in her home country of China. However, two months ago, when she won a Golden Globe for ‘Nomadland’, she was still called ‘the pride of China’. But more attention to Zhao also meant more attention to her past. An old interview from 2013 surfaced again, in which the director spoke negatively about her homeland. “A lot of the info I got when I was younger was not correct,” she said. “I became a real rebel towards my family and my background.”

In a more recent Australian interview, she seemed to distance herself explicitly from China. “The US is my country now,” it read. Four months later, that was corrected, according to Zhao, it should have been ‘the US is not my country’, only one letter difference in English. Still, to no avail: Zhao was called a ‘traitor’.

Positive reports about her Oscars victory that appeared on Weibo, China’s Twitter, disappeared a few hours later. Censorship. In addition, the release of ‘Nomadland’, normally scheduled for April 23rd, was silently canceled. It remains unclear whether the film will ever be released.

Zhao herself made an effort to smooth out the folds during her victory speech on Sunday. “I’ve been thinking a lot lately about how to keep going when the going gets tough. I think it is a result of something I learned as a child. Growing up in China, my dad and I played a game. We memorized classical Chinese poems and texts and then recited them together. We tried to finish each other’s sentences. I vividly remember a text, it’s called ‘The Three Character Classics’. The first sentence goes like this: “Humans are inherently good at birth.” That had such an impact on me as a child, and I still believe it to be true. Even though it may sometimes seem to the contrary, I have always found kindness in the people I have met, anywhere in the world. So this is for anyone who has the faith and courage to hold on to the goodness in themselves and that of others. How hard it may be.”

In any case, the future looks bright for the Chinese director. Not only does the success story ‘Nomadland’ undoubtedly open doors, it also has a new, important project in the pipeline. She took on ‘Eternals’, a new superhero movie from Marvel with Angelina Jolie, Salma Hayek, and Richard Madden in the ranks.

“I mentioned that I would like to make a Marvel movie someday, and the right project ended up with me.” It may seem far removed from the films she made before, but Zhao doesn’t see it that way. “I love to build a whole world. To give it my own twist but at the same time stay close to the essence. In my opinion, that is not very different from the world of the rodeo cowboys.”

No face masks at the Oscars