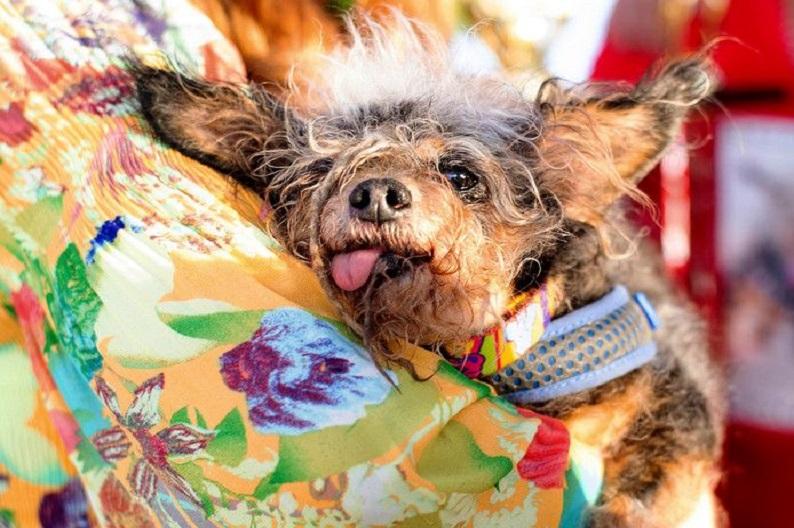 Scamp the Tramp took on this year in the election of the ugliest dog in the world against 18 other four-legged dogs and finally hit the jackpot. The mutt (breed combination unknown) was saved from death by his owner in 2014. She took him off the road and knew she’d made the right choice when he was dancing in the car on Bob Marley. Owner and dog are now a trophy and 1,500 bucks richer.

“I think the audience has seen his good soul,” said Master Yvonne Morones. In addition to the prize money, she’s taking Scamp to New York for a TV show and is allowed to donate $1,500 to an asylum. For reasons enough for Morones to give her dog a new name: Scamp the Tramp (tramp) now passes through life as Scamp the Champ (champion).

During the election, the jury paid attention to, among other things, bulging eyes, crooked teeth, O-legs, and humps. Most of the participating animals, including the winner, were former stray dogs. With the competition, the organizers want to encourage people to give abandoned animals a chance. The event is a celebration of ‘the imperfections that make all dogs special and unique’.

Second, came Wild Thang, a Pekingese from Los Angeles with a hanging tongue that can barely move due to a jaw paralysis. The third place was for Tostito, a chihuahua with deformed ears. Last year’s winner, an English bulldog named Zsa Zsa, was no longer there this year.

A few weeks after the extremely drooling dog convinced the jury, he died.