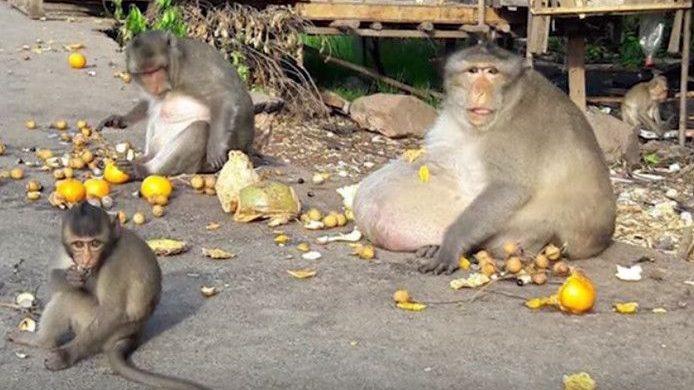 Employees of an animal shelter in the Thai capital Bangkok fear the life of Uncle Fatty: a 20-year-old long-tailed macaque who has been obese for years. The primate, weighing at least 27 kilos, became world famous for its size and photos that tourists placed on social media. According to the shelter, the giant animal has been without a trace for four months. Employed doctors state that the monkey almost certainly died of his extreme appetite.

Uncle Fatty lived in a market in Bang Khun Thian, south of Bangkok, until 2017, where the wild monkey was pampered by merchants and tourists with unsuitable foods and high-calorie thirst quenchers. The result was that the macaque, soon nicknamed ‘uncle fatty’, eventually became three times heavier than a typical specimen. In the end, the animal was transferred by animal protection to a shelter where the primate, which grew into enormous proportions, was subjected to a strict regime.

In the beginning, thanks to a sophisticated diet and more exercise, the monkey lost a lot of kilos, but soon he was back to his old weight. According to the reception, this was due to several factors. Uncle Fatty was still fed food by employees and visitors who felt sorry for him. Furthermore, the always-hungry monkey turned out to steal all the food from other dogs. The last time the obesity monkey was seen, it was back to its original number of kilos: just under 30 kilos clean on the hook. Too heavy to put it back in nature.

The shelter where the monkey has been living for the past two years – the We Love Monkey Club – would have preferred to restore Uncle Fatty to its original habitat near Bang Khun Thian. But only if he had lost weight. “With its unhealthy size, the somewhat older, rather lazy monkey was probably killed by predators,” said Kavinaphat Mongkoltechachat in Thai media. “And if he is not killed, he will almost 100 percent have fallen in size.”

According to Mongkoltechachat, Uncle Fatty was older than macaques usually are. “He was already on retainer. And in the last few months, he began to eat less and less, contrary to his habit. Vets we consulted say that the behavior was a prelude to his death. So Uncle Fatty must have died a natural and lonely death. The latter is normal because monkeys prefer to die in isolation, with no relatives nearby.” As searches for his body proved unsuccessful, the shelter turned out to be looking for him against its better judgment. “We keep hope, but fear the worst.”