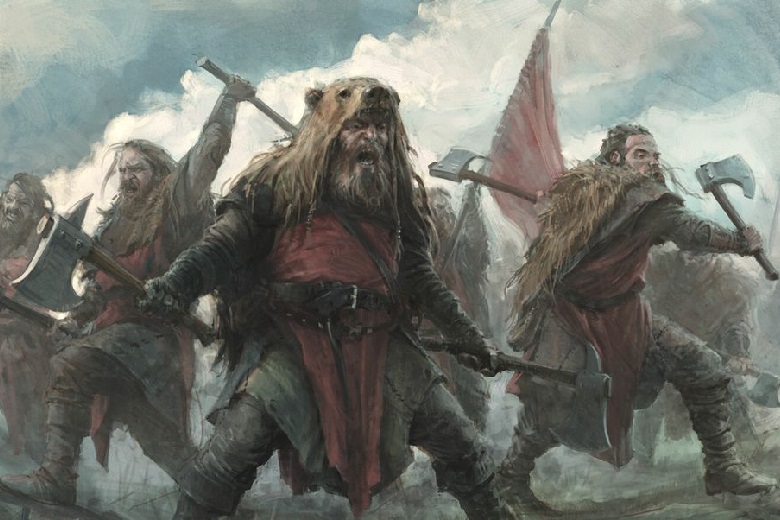 They terrified everyone who was not lucky enough to collide with them during the battle: they roared, rushed at opponents without chain mail and sometimes without weapons at all, bite their shields in rage, and most importantly, they did not feel pain and often won victories in battles.

As if turning into some wild beasts, Berserker warriors gave life to many myths and legends, and they are seen through the prism of past centuries as semi-mythical characters.

The nature of the fearlessness of warriors in different cultures is different – samurai, for example, but above all, the honor of dying in battle for the master, and therefore do not avoid death and do not fetter themselves with excessive caution. But in the north of Europe once raged, in the literal sense of the word, berserkers – not samurai at all, but also an exciting category of warriors to study.

But to study them is not a straightforward matter, since up to the present time, this phenomenon has reached more in the form of legends than described in historical documents and confirmed by facts.

The tribes of the Eastern Slavs knew about berserkers firsthand and most likely tried to avoid meeting them at all costs. But how was it to be avoided? The times from the VIII to the XI century were the period of the rule of the Vikings, “sea robbers” who either limited themselves to the devastation of coastal villages and cities, then conquered the lands of northern Europe and not only.

With the Vikings, the history of the berserker warriors, the mysterious characters of Scandinavian history, is associated.

Why mysterious? It’s just that if berserkers existed, such as it now presented them to historians, it was even before the appearance of writing on the territory of Scandinavia and Northern Europe in general, that is, before the spread of Christianity there. Starting from the 12th century, sagas began to be recorded – literary works based on oral narratives. Still, even these sources cannot be considered reliable enough because rumors, by that time, had been told for more than one hundred years. In Byzantine sources, descriptions of such fearless “savages” are found; however, they are not called berserkers.

What berserks were like, why and why they went on a rampage

The first document in which the word “berserk” appears is Thorbjørn Hornklove’s saga of the Battle of Hafrsfjord in 872. Translated from Old Norse, “berserk” means either “bearskin” or “naked shirt”. Both interpretations are allowed because berserkers, according to the epic, really fought without chain mail and did not use defensive weapons, and preferred the skin of a bear as clothing.

They fought with particular fury, frenzied, entering a state of anger that could not be appeased. During the battle, the berserkers did not feel wounds; according to history, neither iron nor fire could kill them.

It was as if they turned into bears – the origin of werewolf legends is, therefore, sometimes associated with these warriors. Berserkers often started the battle – so it was possible to introduce uncertainty or even panic into the enemy’s ranks.

These frightening-looking warriors often went to the service of the rulers, performing the functions of both personal bodyguards and executors of special assignments for the master. They went on Viking ships, becoming an excellent aid in the conquest of new possessions.

Berserkers did not cut their hair or shave their beards – until they won their first victory, then they got rid of the hair on their heads.

Traditionally, a battle-ax or a sword is considered a berserker’s weapon, but, according to legends, they could be thrown back and fought with almost bare hands. After all, the beast does not use human weapons, except perhaps a club or stone raised from the ground. After the end of the battle, the berserkers fell into a long, up to several days, deep sleep.

How the disappearance of berserkers explained

Although the information about berserkers cannot be considered reliable, their numerous references in ancient works make it possible to form some idea of these “fighting madmen” and make assumptions about the reasons for such behavior during the battle. According to one version, berserkers used tinctures of hallucinogenic mushrooms, particularly fly agaric, as shamans of some northern peoples do.

Another explanation for the state of frenzy is mental illness, possibly inherited from the parents, leading to the transmission of this fighting style to offspring.

Another likely reason for exceptional courage and insensitivity to wounds is the state of combat trance, which was caused by special rituals.

With the end of the Viking Age in the 11th century, berserkers were no longer considered heroes as they used to be during the conquests. They did not like to work and really could not, and it was challenging to find the use of their fighting rage in a peaceful life. Histories say that during their “seizures”, berserkers threw huge boulders and uprooted trees.

The church did not favor berserkers, and in the new sagas, they were already exhibited as robbers and villains. At the beginning of the second millennium, these warriors were outlawed, and after a few decades, berserkers were already part of the past.