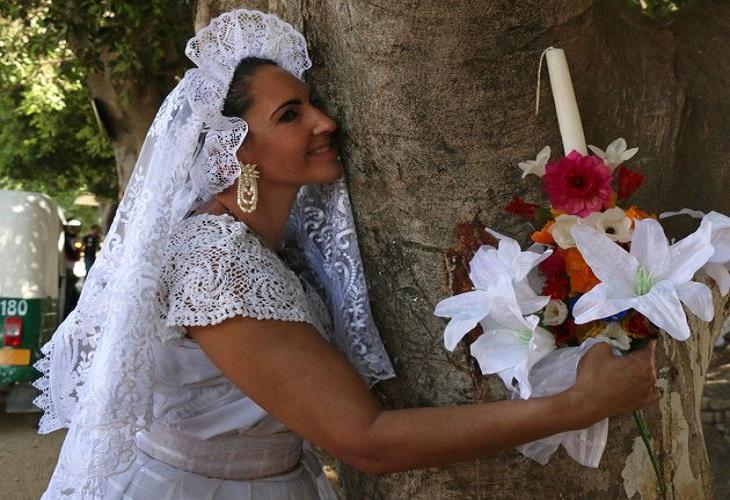 Tree marriage is a type of symbolic marriage between a man/woman and a tree, which is said to be filled with supernatural life. It can be a marriage by proxy, in which the person marries a tree. Later, when the tree falls, this person becomes a widow or widower, which is a prerequisite for marriage in some cultures.

Tree marriage was once rampant in India among some cultures around the belief that trees contain hidden or sacred power to heal or enhance fertility or that they contain the souls of ancestors or unborn children.

These five people set their mind and marry a tree

In 2007, Bollywood Queen Aishwarya Rai of India became the first former Miss World to marry a multitude of sacred trees and shrubs before bonding with a man. The reason, as we were told, was that she was astrologically a Martian, a Manglik.

Manglik, according to Hindu astrology, is the one who has the power of planet Mars sitting in the house of marriage in its horoscope. It is said that Mars, situated in this way, makes Martians robust, assertive, and somewhat intolerant of hooligans in general. It also poses a severe threat to the physical well-being of the spouse and perhaps his or her family.

At first, there were doubts that Abhishek Bachchan – Aishwarya Rai’s husband – would marry a Martian at all. Still, apparently, his love for her was intense. Thus, after consultations with many astrologers, it was decided that the marriage could take place on the condition that the Martian bride, before binding herself in marriage, would visit several temples and perform certain rituals to propitiate the angry red planet.

This meant, the astrologers said, that heaven would marry a pipule and a sacred basil bush. They will absorb all these evil rays from Mars. It is essential to note that Abhishek also had Mars in his horoscope. Still, no one excluded that he would even marry a sacred cow or a snake to prevent the danger coming from Mars to the life of Aishwarya Rai and her family.

Women in the Mexican town of San Jacinto Amylpas marry trees. This oath of allegiance to the trees is an act of protest by environmentalists calling for the prevention of illegal logging in the town, reports brides.

Andrea Tanant, one of the brides, said that she described it as an exciting fact in which they have a commitment not only to this tree, but to the whole of nature, and how much they have already damaged it. That’s why she decided to watch the ritual and devote herself to it. Another bride stated that her wedding was a formal protest in favor of the trees, as PJ Media notes.

The marrying a tree ritual was established by the Bedani organization to express gratitude to Mother Nature. On the other hand, it was a symbolic wedding in which the Incas married trees.

The 100-year-old ficus, which stands in the middle of a local park in Fort Myers, Florida, has a bride. Karen Cooper, 60, married a tree during a community event on at Snell Family Park as part of a neighborhood effort to save a tree from being cut down.

“When I heard that the city was planning to cut it down, I thought, ‘I don’t think so,’” said Cooper, who has lived in Fort Myers for almost 40 years, she explained to ABC News. She further explained to be “having fun with something very serious”.

The tree is the center of a lovely neighborhood park, and without it, the park would be just a wasteland, she said. In this park, people get married, she detailed. “But I married a tree,” Cooper said she was inspired by stories about women in Mexico who married trees to protest against logging.

Kate Cunningham, 34, from Melling, tied herself up in a marriage in Rimrose Valley Park in Literalland, in front of family and friends. The woman married a tree at a ceremony in Merseyside Park and said she has a good reason for her wedding vows.

Dressed in an olive green dress, home skirt, and green boat shoes, Miss Cunningham married elderberry in the part of the park where Chaffers Field was growing. The bride also announced that she would change her name by conducting an action survey to celebrate the event. She will now be known and called Kate Rose ‘Elder’, by the look of the tree she is now married to.

According to Kate, “at first it was just an idea”. But she decided that she would make it happen, and it’s a great day for the whole community. There were dozens of guests at the ceremony.

This trick is the last attempt by the locals to stop the plans to build a new diversion through the Rimrose Valley. Miss Cunningham said she was inspired by Mexican women activists who held such ceremonies to draw attention to illegal logging and land clearing.

Richard Torres, a Peruvian actor, “married” a tree on Sunday in the Colonial District of Ciudad, in the capital of the Dominican Republic, to draw attention to the indiscriminate felling of forests.

During the curious ceremony that attracted dozens of people in Columbus Park, a few meters from Santo Domingo Cathedral, Torres put a ring on the tree and asked the person acting as the judge that he has accepted the marriage.

“We have come to Santo Domingo to perform our wedding number 17, and we will not stop until we have a new Guinness record, with 100 ceremonies like this,” the actor said to EFE.

Torres was assisted by some Dominican actors, who served as best man and bridesmaid at the marriage ceremony. Although admitting that the project is costly, the actor said he would continue with his plan to hold at least five weddings a year in different countries and cities.