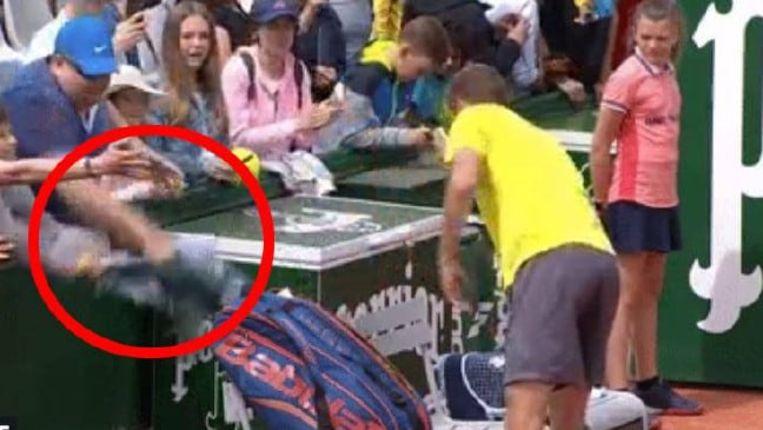 While Roger Federer and David Goffin impressed yesterday on the first day of Roland Garros, a spectator turned out to be an anti-hero. The man was so eager to take home a souvenir that he coughed to death ‘stole’ a towel from a boy.

The scene, shown in the video below, took place after the first round match between the Tunisian Malek Jaziri (ATP 92) and the German Oscar Otte (ATP 144). The 25-year-old Otte won somewhat surprisingly in four sets and after the game, he tried to make a young fan happy by giving him one of his towels.

You should know: such Grand Slam towels are gadgets for tennis fans because the name and year of the tournament are stated on it. The selfish older man clearly realized that.

After all, the spectator did not give the boy next to him the gift. With proper pulling and dragging, he appropriated the gem, clearly to Otte’s disbelief. It rained sharp reactions on Twitter for the greedy fan, including the Swiss tennis star Belinda Bencic (WTA-15) could not believe her eyes. “No idea why an adult man would love to have a sweaty towel from another adult man,” someone else commented.

According to some Twitter users, Otte, fortunately, prevented the young fan from going home disappointed. The German would have pulled out another towel for the boy. Otte actually failed in the Roland Garros qualifiers, but he was still fished up as a lucky loser.

He survived the first round of the second Grand Slam tournament of the season, and his next opponent listens to the name ‘Roger Federer’. Something tells us he’ll be able to fill some towels with his sweat…