The Guinean who lives in Paris since 2000 is world champion in the discipline through which he marvels the world. 19 years ago, Iya Traore arrived in Paris, France, in search of a dream: to become a professional footballer.

Although in Guinea, the country where he was born, he had started as an archer in very humble teams, with the passing of time his coaches explained that he could succeed as a field player, but for that he had to travel to Europe to try his luck.

Thus, in 2000 he came to a test at Paris Saint-Germain (PSG), after a brief stint at ESP and Paris FC, and a few minutes were enough in the green grass to show the observers that he was in conditions of playing for the first team.

However, his career was cut short, and the need to raise money so that his father could move to France also pushed him to become a street artist. With a ball in his feet and a skill rarely seen, the young man began his first presentations in the Paris metro and in some corners of the French capital before a small audience. But the arrival of cell phones connected to the Internet made him rise to fame. Each tourist who saw him filmed him with his mobile device, and today his videos are very popular on YouTube and on social networks such as Facebook and Twitter.

Since then, he has received dozens of awards, he has been the protagonist of a documentary, has been invited to more than 40 countries to show his talent and was even part of the video clip of Shakira’s song “La La La”. In addition, in the preview of the 2014 World Cup, he was one of those in charge of presenting the official ball, Brazuca, along with former players Michel Platini and Franz Beckenbauer.

“If there is a lot of wind, I cannot work,” he told Goal in a 2016 interview in which he acknowledged that he still wanted to become a professional footballer. In addition, he confessed then that his parents were very afraid when he left Africa for France: “My parents were afraid that I could be a drug dealer or something like that if football did not work.”

Although his career as a footballer did not work, freestyle opened the doors to a world he did not know. In 2017 he signed a sponsorship with the company BKT, after having consecrated freestyle world champion. With such income, Traore was able to boost his foundation, Kebeya, which focuses on helping Guinean children and young people through sports and school programs.

As if all this were not enough, the Guinean entered the Guinness Book of Records on three occasions, one of them for climbing back 75 steps while playing with the ball. In addition, he joined during 2016 and 2017 the circus Rally Legacy of Barcelona, where he performed more than six meters high. 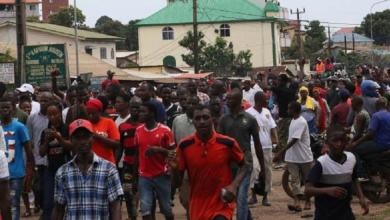 In Guinea, 46 died and hundreds injured, according to UFDG