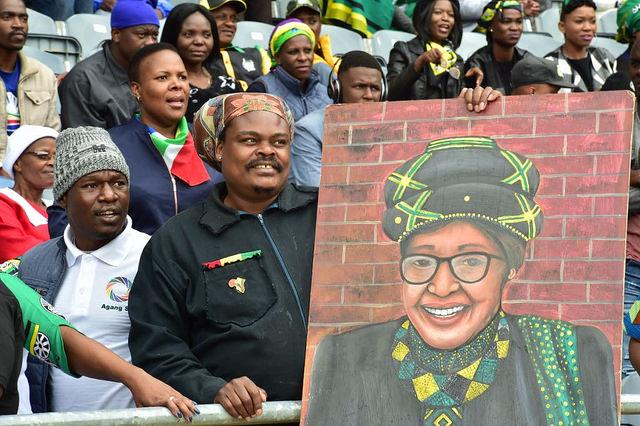 This Saturday, South Africa pays a last tribute to Winnie Mandela who passed away on April 2nd. The funeral of Nelson Mandela’s former wife takes place at the Soweto township stadium, which is also part of the struggle against apartheid. Several thousand people are expected after a ten-day national mourning.
The Soweto stadium continues to fill up this Saturday morning.

The dignitaries, officials and relatives of Winnie Mandela arrived on the red carpet in the middle of the Soweto stadium. They took place around the official stand. On the screens around the stage, the crowd was able to follow the convoy that transported the remains of Winnie Mandela from her residence in Soweto to the stadium.

The coffin of Winnie Mandela, adorned with a South African flag, was placed in the centre of the stadium where we can hear the fervour of the thousands of South Africans gathered, the songs of struggle which are sung at full lungs by the public. Several speeches are expected. President Cyril Ramaphosa will, of course, take the floor. And among the foreign representatives invited today, we can mention in particular the President of the Congolese Denis Sassou-Nguesso who should also make a speech.

Winnie Mandela will be buried this afternoon in the Fourways Cemetery, north of Johannesburg, in a private ceremony.

Why strangers may have similar memories: Nelson Mandela effect

The causes of the Sharpeville massacre, March 21, 1960