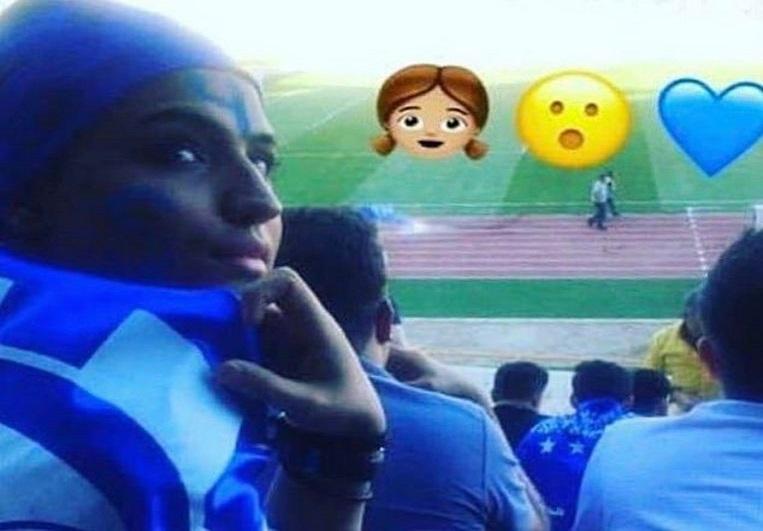 She was a big fan of the Iranian football club Esteghlal. Only, she lived in a country where it is forbidden for women to enter stadiums where men play their matches. Last week Sahar Khodayari (30) set herself on fire after she heard that she might have to go to jail because she had circumvented the stadium ban. The young woman has now died of her injuries. Iran mourns the death of ‘Blue Girl’, the protest against the “old-fashioned” stadium ban is resurfacing.

The young woman’s death was brought out yesterday. According to her father, she was the only one of his four children – two boys and two girls – who loved football. She was a super fan of Esteghlal, a club in the capital, Tehran.

In March of this year, Sahar (according to the BBC, not her real name) was arrested after she slipped into the Azadi stadium dressed as a man to watch her favorite club play football against Al Ain from the United Arab Emirates. She was wearing a blue wig and a long coat. In her homeland, women have been forbidden to watch men’s football in stadiums since 1981. Sarah spent three days in a cell but was allowed to await the trial in freedom. She was charged with ‘wearing a hijab the wrong way’ and ‘insulting cops’.

Last week she came to the hearing to hear that it had been postponed due to a judge’s family circumstances. Sarah left again but came back a little later to pick up the phone she had forgotten in court. Probably when she heard the court staff talking. There was talk of a prison sentence for her of six months to two years. Torn by grief, the young woman set herself on fire outside the court. Ninety percent of her body burned, she died yesterday in the hospital.

According to Daily Mail, her father states that his daughter dreamed of becoming a police officer, but she learns that she couldn’t be because she was a woman. She went to university and got a bachelor in computer science and languages.

Her gruesome death has once again sparked off the debate in Iran about a ban on women’s stadiums. On social media, Sahar is called ‘Blue Girl’, the colors of the club she so passionately supported. Soccer players and well-known Iranians also get involved in the polemics.

They call for the ban on women in the stands to be abolished. Football club Esteghlal shared his condolences with her family in a statement. Captain Masoud Shojaei of the national football team says that the ban is “rooted in outdated thoughts that will not be understood by future generations”.

Former footballer Ali Karimi, who played at Bayern Munich and played 127 times for Iran, calls on football fans on Twitter to stop going to the stadiums as a protest after Sahar’s death. He also asks Ronaldo to wear a picture of Sahar on or under his outfit of Juventus. “Do something! Do something!” It sounds.

The Iranian-Armenian footballer Andranik ‘Ando’ Teymourian, the first Christian leader of the Iranian national team and himself a player at Esteghlal, writes on Twitter that one of the big stadiums in the capital Tehran will be named “once, in the future” after the deceased football fan.

The female member of parliament, Parvaneh Salahshouri, calls Sahar a ‘girl from Iran’ and tweets: ‘We are all responsible’.

Human Rights Watch states that the stadium ban for women is not laid down by law but imposed by the Iranian authorities and that it is not in compliance with the rules of the world football association FIFA.

According to the human rights organization, FIFA instructed Iran to lift the ban by 31 August, but another four women were arrested in August for entering a stadium. During the soccer World Cup in the summer of 2018, women in Iranian football stadiums were allowed to watch the broadcasts on large screens. The football association labeled these developments as positive, but it did not go fast enough for FIFA.