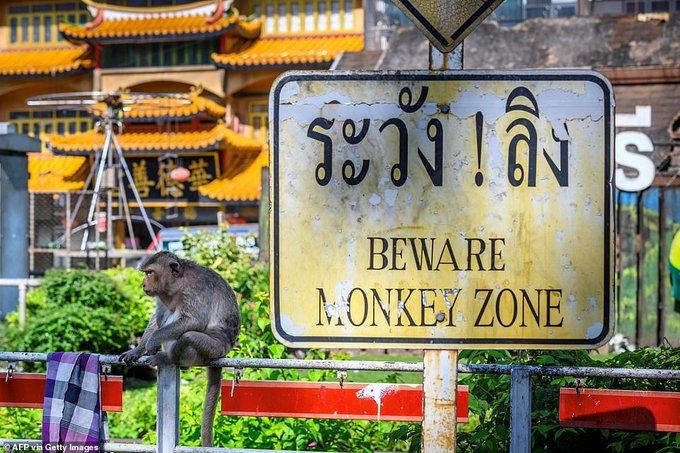 Faced with a veritable monkey gang war, the Thai town of Lopburi has decided to launch a campaign to sterilize the monkeys, which, according to some estimates, are about 6,000 in its streets.

Several thousand monkeys have invaded the Thai city of Lopburi, located some 150 kilometers north of Bangkok. It had made it an attraction, but today, the city is suffocating under the influence of macaques, their population increasing uncontrollably.

Today, there are, according to some estimates, 6,000 monkeys who cohabit with some 60,000 inhabitants.

This forced the authorities to react.

For example, they have launched a sterilization campaign to curb the proliferation of primates. The objective is to sterilize about 500 of them. Attracted by the food deposited in large cages, they are put to sleep and then taken to a veterinary clinic.

On 20 June, the first day of the campaign, “we captured 100, but we will only operate on half of them […] Some have already been sterilized, others are in the nursing phase, others are still too young,” said Narongporn Daudduem, director of the Lopburi department of parks and wildlife, according to AFP.

With tourists usually coming to Lopburi in their hundreds, the primates had no problem feeding and surviving. But the outbreak of Covid-19 brought some relief.

The “kings” of the city

Since March, travelers no longer come and the macaques, which have been tolerated by the population until now as a source of income, attack cars, and make the community feel uncomfortable.

“With the departure of the tourists, they have become more aggressive, fighting humans for food. They invade buildings and force people to flee their homes,” said veterinarian Supakarn Kaewchot.

Macaques had long been the “kings” of the city, tolerated and even worshipped by the inhabitants as a significant source of income. The town has also put up signs at its entrance to indicate the Monkey Zone or Monkey Territory.