An American woman got a fright of her life on Friday when she saw a ‘ghost’ next to her sleeping child on the baby monitor. Only after a sleepless night did she dare to investigate, after which it turned out that it was all due to her ‘negligent’ husband.

Maritza Elizabeth from the US state of Illinois describes the incident on Facebook. She was shocked to say she saw a kind of ‘ghost baby’ in the box next to her sleeping son on the monitor.

The 32-year-old woman was so shocked that she did not sleep a wink for the rest of the night. “I even tried creeping in there with a flashlight while my son was sleeping,” she says in the Facebook message, which has now been shared more than 267,000 times and has been liked more than 260,000 times.

Only the next morning, after the woman went out to investigate in the daylight, was the mystery unraveled. The observed ghost baby turned out to be a photo of a baby on the mattress. “It turns out my husband just forgot to put the mattress protector on when he changed the sheets,” so that the mattress label with a photo of an infant was visible on the baby monitor.

“I could kill him,” she says, laughing. There is a massive response below the message. “My God! I would lose myself and run inside. Or, to be honest, I would have forced my husband to go inside,” someone says. “Doodling, logical that you were shocked,” another responds.

Front pages of Australian newspapers are blacked out in protest 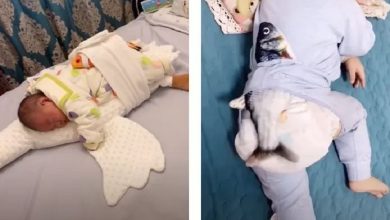