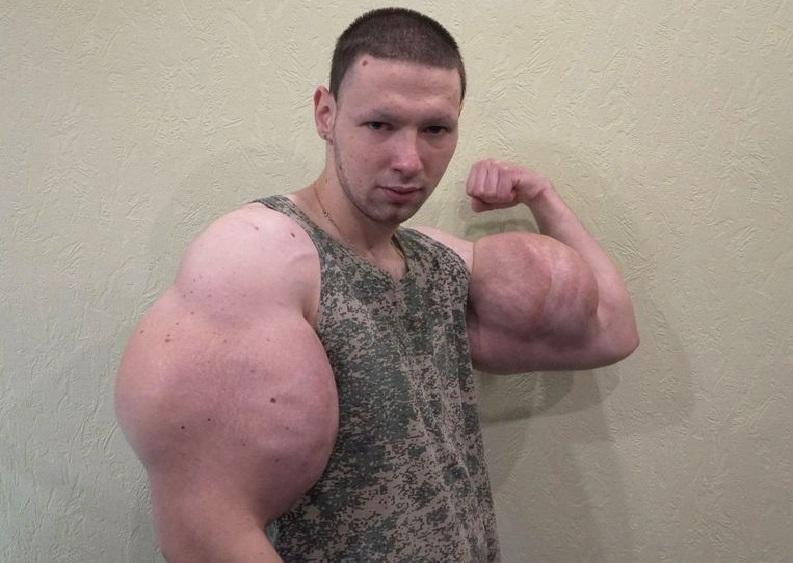 Popeye! Kirill Tereshin (22), a Russian bodybuilder with biceps who have become at least the size of a football through synthetic oil injections, has started a fundraising campaign in his home country to get the stuff back from his arms. A necessary operation, because if that does not happen very quickly, there is a chance that the limbs of this human ‘Popeye’ will become paralyzed and, in the worst case, must be amputated.

At the end of 2017, doctors already warned the young powerhouse of the dangers of his unnatural ‘muscles’. They advised Tereshin to have the oil (actually a mixture of oil, alcohol and the anesthetic lidocaine) immediately sucked from his biceps. But the Russian did not do anything with that suggestion. Reason? He cannot afford to pay for the operation. Furthermore, he does not want to be treated in his home country, because he does not trust the doctors there. He prefers to go under the knife in Great Britain where saving his swollen upper arms costs over 41,000 euros.

According to Tereshin, he tells British tabloid The Sun, he started spraying the life-threatening stuff because he was unsure about his appearance. “Before going into military service, I went to the gym for two years, but the results were disappointing.” “For that reason, I decided to inject the oil myself. My mother was very worried about that. She advised me against it. Still, I continued but now I have stopped because of serious complications. Thank goodness I know that the junk can be taken away. The only question is when.”

‘Popeye’ hopes to go under the knife soon. “My arms are completely red and are already becoming painful and partly numb,” said the Russian who has many followers on social media. With the photos that he shares, he mainly gets negative reactions. Tereshin has a double feeling about that, because: “When people see me on the street, they always want to be in the picture with me.”

Tereshin owes his fame not only to his mega biceps. What also helps is that he is engaged to Russian blogger Victoria Yakynina, whom he made a proposal shortly after he was dumped by his then-upcoming Olesya Malibu. She left him a few days before the two got married because she was in doubt about their relationship. Kirill then shaved his eyebrows because he had heard that women find that attractive, an action that made him know Victoria. She also insists that Kirill be helped.

Doctors have been warning for years about injecting synthetic oil. The non-bodily substance can cause serious complaints such as the death of muscles, nerve damage, cysts, and even brain hemorrhage. Despite the dangers, it is still widely used in the illegal circuit. Incidentally, the oil only affects the appearance and does not lead to more muscle strength. Kirill Tereshin not only has the stuff in his arms. He has also pumped his calves with it, he says, to get ‘legs like torpedoes’.