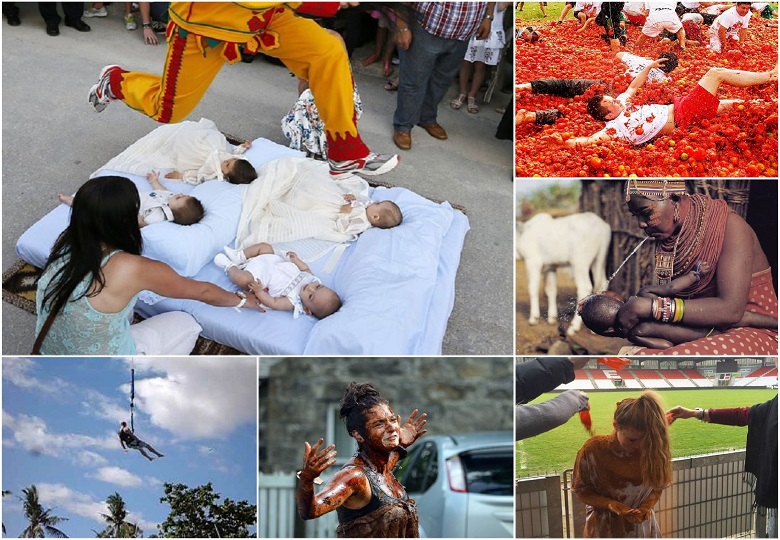 Jump over a baby or throw him off a high wall? A month to sob before your wedding or to throw a ripe tomato at a passer-by? Pierce some part of the body with iron or file your teeth with a file in front of your relatives?

These and other traditional rituals seem wild to us, but there are so many original customs as there are cultures in the world. By the way, all of them said is done solely for luck: no matter how different traditions may differ, the pursuit of happiness unites everyone on the planet.

The leader of the rating is also India, namely the states of Karnataka and Maharashtra. Seven hundred years ago, the infant mortality rate in the region went off the scale, and the holy elder advised parents to prove their faith in God by throwing barely born children from a high church. The Almighty, according to him, will work a miracle, and the kids will remain unharmed.

Since then, Muslims and Hindus gather at the 15-meter walls of Baba Umer Dargah and other sanctuaries and throw up to 200 newborns a year from the rooftops, first swinging them by the arms and legs. Downstairs, the crowd holds a sizeable woven cloth and catches a screaming child with ritual songs and dances. This eerie and probably traumatic experience should bring happiness, health, and prosperity, but it’s scary to think about what could happen if something suddenly goes wrong.

In India, Malaysia, Thailand, Singapore, Myanmar – wherever Tamil diasporas live – Thaipusam is celebrated on the complete moon of the month of Thai (January-February). According to legend, on this day, Shiva Parvati’s wife gave the God of war Murugan a spear, with which he stabbed the demon Surapadman. Hindus thank Murugan and ask him for protection and help through an expressive Kavadi dance that pierces various parts of the body. Believers pierce their tongues, cheeks, arms, legs, fearing no pain, no blood, and no consequences.

And the cruelest initiation rite awaits the young men of the Satere Mawe tribe, who have reached the age of majority, lost in Brazil’s jungle. To become adult men, they force to dance a traditional dance wearing special gloves. Inside the “mittens” decorated with feathers, paraponer ants swarm; the bites are 30 times more painful than bees and are comparable in sensations to bullet wounds. Moreover, insects also tease: they are fumigated with herbs to fall asleep, and when they wake up, they become as aggressive as possible.

And another glorious Indonesian tradition. Every teenager in Bali must go through a kind of dental initiation by his age. All relatives gather in the church, the hero of the occasion lies down in a place of honor, the priest takes a file in his hands and cuts off the sharp teeth of the “patient.” Locals associate them with lust, greed, anger, and other sins, so the owner of fangs is unlikely to be able to go to heaven after death. Tooth dust buried in the temple, and the birthday man sparkles with a renewed smile, glad that everything is over.

For 15 centuries, the Vanuatu archipelago inhabitants in Melanesia have built 100-meter wooden towers every April. They do not admire the surroundings from their height but sighed down, attaching a rope made of grapevine to their feet. Participants in this action are adults and boys from 5 years old, and the higher they climb and the closer they reach the ground, the more blessings they receive from local deities.

How to protect a newborn from evil spirits and generally insure against troubles in the future? Of course, jump over it and disguised as a devil. It believes in Spain, where the El Colacho ritual has been performed since the 17th century. Residents of the town of Castillo de Murcia lay their babies on soft featherbeds in the center of the main square, and members of the brotherhood of the Holy Mystery of Minerva in yellow-red suits, masks and with whips first walk the streets, frightening passers-by, and then jump over the crumbs at a run. They are carrying away all the misfortunes that threaten them.

March 15 in Japan is the Honen Matsuri fertility festival, celebrated in Komaki on a particular scale. The locals arrange a splendid procession, carrying a giant cypress phallus across the city. The penis, 2.5 m long and 250 kg in weight, symbolizes the brave warrior Take-ina-dane, the wife of Tamahime no Mikoto – in fact, the goddess of fertility. The affair did not limit to a giant alone: sweets, dumplings, and souvenirs in the form of clear are everywhere. A rich harvest and a record birth rate for the whole year are guaranteed!

More precisely, not a month, but three days after the wedding. That is how many newlyweds of the Tidong tribe in Indonesia should not leave their homes, and most importantly, use the bathroom and toilet. It is unclear where the connection is, but hygiene at this time is fraught with an early divorce, betrayal, illness, death of children, and other misfortunes. So that the newlyweds do not dare to disobey, their relatives look after them, at the same time bringing the “prisoners of love” a minimum of water and food.

To spit over the left shoulder three times and knock on wood just in case – which of us has never resorted to this ancient superstition? But the courageous Maasai warriors in Kenya do not knock on baobabs, but they spit left and right. They believe that saliva protects from evil spirits.

Therefore they spit on their palms before shaking hands, on gifts before delivery, on all four sides before entering a new house, on everything they see for the first time, on the heads of brides.

They even spit on newborn children, and not only on their own – sometimes they go to another village to “bless” the baby.

During the last Wednesday in August, the town of Buñol in Spain turns into a battlefield. In a bloody battlefield, they are judging by the scarlet mess on the sidewalks and walls. Fortunately, there is no bloodshed trace, just amid the medieval “La Tomatina” – spectacular and gambling farewell to summer. In the morning, a truck with ripe tomatoes drives into the main square – and they have to fire at those around them. The fruits are pre-cracked not to injure anyone inadvertently, and then they go all the way.

In China, maidens for marriage are more supportive: no bullying and ridiculous jokes. Nevertheless, it is the brides of the Tujia people who cry for a month before the wedding. And not alone, but in the company of mothers, girlfriends, and relatives: tears, paradoxically, express their joy before the coming event. The girls are spinning every day for several hours in a row and heightening the effect they sing memorable songs learned from childhood. And all because the more tears shed before marriage, the less – in living together with your spouse.

There is a similar custom in Scotland, although its goals are entirely different. The bride should not rush to preen because friends will spoil the picture anyway: they will smear them with rotten eggs, smelly sauces, sticky mud – in general, the most disgusting that they can get hold. Moreover, they will tie them to a post in the center of the city or lead them through the streets for passers-by’s amusement. The incredible thing is that their intentions are noble: the groom must prove his love and loyalty by admiringly accepting the future spouse even in such an unsightly form.

If a girl or boy in Denmark is still single by their 25th birthday, their friends are raging too. Poor fellows are planted in the middle of the street or, even worse, tied to a lamp post and generously sprinkled with cinnamon from head to toe (sometimes raw eggs are added to keep it strong). If the birthday boy copes with the moral trauma and lives to the 30th birthday but still does not get a partner, he will also sprinkled with pepper. This strange tradition dates back to the 16th century, when Danish spice traders traveled across the continent, sacrificing their personal lives for work.

On November 25, France celebrates the Day of St. Catherine, the patroness of unmarried girls. In the Middle Ages, ladies who reached their 25th birthday and (oh, horror!) Did not marry, dressed up in yellow and green hats (these colors symbolize hope), and brought ribbons, flowers, and other gifts to the patron’s status. And that evening, they arranged dances so as not to postpone the search for the betrothed. Today, bachelors of all ages are having fun at the holiday, competing whose hat is more fantastic: flower beds, ships, airships “grow” on their heads – horse races in the USA and Britain are resting.

Mauritanians are crazy about overweight women; fortunately, they have a lot of choices. To prepare for the wedding, the girls’ families begin force-feeding – the bride-to-be is supposed to eat 16,000 calories a day. The ritual starts long before the wedding and can last for several years.

Amazon rainforest before and after: 10,476 square km disappeared in a year

Noiva do Cordeiro: Only city in the world where only women live