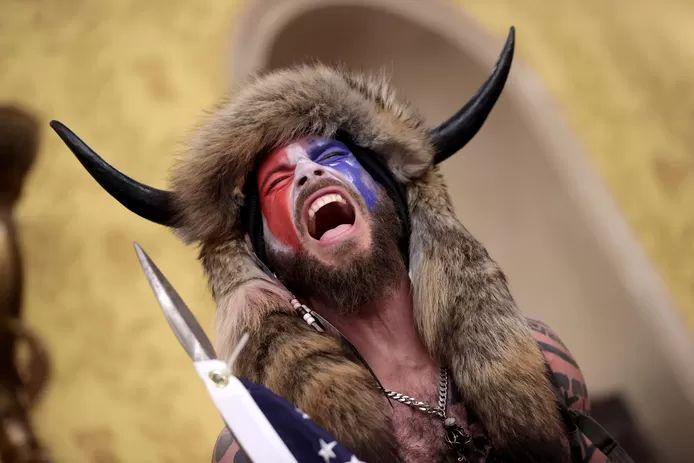 In the seat usually reserved for the vice president, a half-naked, tattooed man in a fur cap with horns on his head sat in the US Senate on Wednesday. He was one of the leaders of the storming of the Capitol. In the US, they know him as the QAnon shaman, a well-known conspiracy theorist.

As the pro-Trump protesting crowd broke through the police cordons on Wednesday night and forced their way into the Capitol, a war-colored figure with an enormous cap walked up the front. It was the same man who often stood in the front row at pro-Trump rallies in recent months. It took American media little time to identify him: Jake Angeli, the QAnon shaman.

Time and again, he shows up at meetings to proclaim his love for Trump. It also tells about QAnon: a movement of conspiracy thinkers that has grown enormously in America in recent years.

Their theory boils down to the fact that there is a Deep State in power in the US, consisting mainly of Democrats, which (among other things) deals with satanic child abuse.

Donald Trump is said to be the leader fighting this Deep State and bringing it to justice. Jake Angeli is one of the movement leaders, but among the people who entered the Capitol were several men wearing QAnon shirts.

The movement has gained influence in the US in recent years. In 2016, an armed man burst into a pizza restaurant in Washington because QAnon supporters were convinced that children were being held and abused in the restaurant’s basement. The restaurant turned out to have no cellar at all.

President Trump has never publicly supported the conspiracy theory but has described the movement as “people who love our country.”

American media now say that Wednesday’s chaos is partly due to this: the QAnon movement saw itself supported by the president and came to where he believed it was all about: the Capitol.

According to American media, Angeli is from Arizona and worked there as an actor, voice-over, and singer. Since 2019, he has regularly appeared at the Capitol in that state and screamed conspiracy theories.

In an earlier interview, he said he dressed as a shaman, a seer, “to get attention.” At a Trump rally in Phoenix in February 2020, he carried a sign that read ‘Q sent me’.

Q is a mysterious, anonymous person who provides his followers (the QAnon) with hints about the great plot. At that meeting, he would have said: “The snowball has started rolling, and it is only getting bigger. We are becoming mainstream”.

On Wednesday, that snowball had grown and strengthened by President Trump’s words to the point that it arrived at the Capitol in Washington.