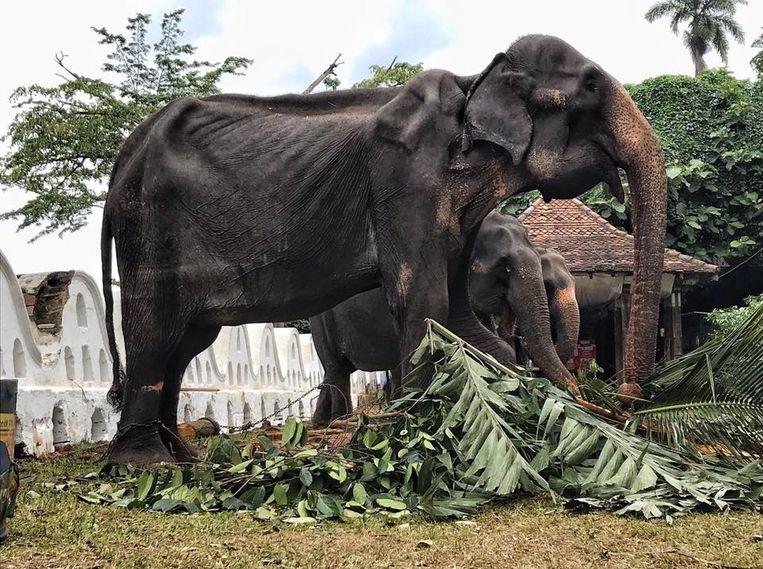 An emaciated elephant no longer has to walk along in a parade in Sri Lanka after a storm of protest on social media. An animal protection organization shared photos of 70-year-old Tikiri and they were greeted with horror. The organization of the Buddhist festival in the city of Kandy announced a day later that the animal of its owners no longer had to participate in the closing show of the annual ten-day event.

It was the Thai Save Elephant Foundation – who stands up for the Asian elephant – who rang the bell on Tuesday. She shared photos of Tikiri on social media, who had to walk along with some 60 other elephants in a parade for the popular Perahera festival.

That parade starts early in the evening and lasts well into the night, 10 evenings in a row. The elephants have to walk for miles, in the crowds, the noise, the smoke, and the fireworks.

“No one sees her bony body or her weakened condition, because of her costume,” Save Elephant Foundation wrote with some shocking photos. “No one sees the tears in her eyes, injured by the bright lights that decorate her mask, no one sees her difficulty to step as her legs are short shackled while she walks.”

Many people shared the post and hundreds expressed their horror. “This is worse than bad,” it sounds. “I have tears in my eyes. This beautiful lady must be taken to a place where she can spend her old age in peace. This breaks my heart.”

A day later, there was a reaction from the head keeper of the Temple of the Tooth, who organizes the festival. Pradeep Nilanga Dela stated to the French press agency AFP that Tikiri would not participate in the grand final of the event on Wednesday.

According to the man, the owners of the animal had told him that the “medical condition” of the elephant did not allow it and that Tikiri was being “treated.”

Elephant expert Jayantha Jayewardene, among others, was relieved. He described the way Tikiri was treated as “inhuman.” “The animal is clearly severely malnourished and is close to its death,” AFP said. “Owners let their elephants parade to honor it. They don’t do it for the animal itself. Such a thing should not be possible.”

In the meantime, animal rights activists have also launched a petition asking the Government of Sri Lanka to “put an end to the barbaric torture and abuse”. According to the American news channel CNN, more than 8,000 people have already signed it. Tourists are also called to boycott the festival.